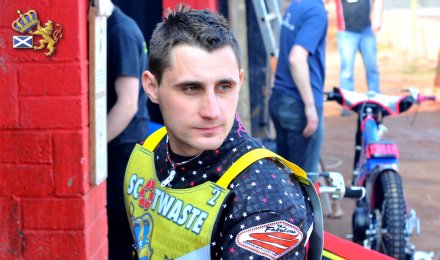 Derek Sneddon returns to Armadale as the Scotwaste Monarchs’ captain for the 2013 season.

He actually took over as team captain during 2007 after Ronnie Correy left, then led the team to the 2008 Premier League title in one of the club’s best ever seasons. Even though that was his only full season as Monarchs’ captain, he earned an outstanding reputation in the role.

In all it will be the sixth season as a Monarch for the Falkirk based rider who (we have to say) looks a lot younger than his 30 years!

Derek says “I’m honoured to be asked to be captain once again. It’s sad that the previous captain Matthew is moving on but that means somebody has to be asked to take on the job, and I’m happy it’s me.

“Obviously we only know some of the team at the moment but I know roughly what the thinking of the promotion is, and I can’t see any reason why we shouldn’t have a fantastic season.

“It’s going to be interesting with all the new rules and regulations, I know there has to be cost cuttings.

“Last year was such a stop-start season, not just for me but for everybody. As well as the weather, I had the broken collar bone, and it was also a case of first year back at Edinburgh. It takes a little while to get back into the swing of things.

“I’m looking forward to next season and a kinder deal with the weather”.