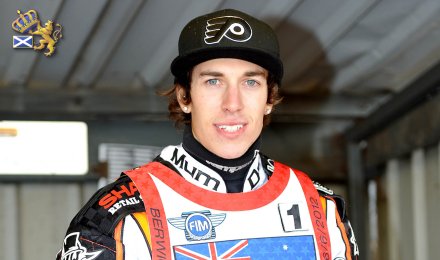 Sam at Berwick for the GP qualifier, in which he scored 12 Image Credit: Ron MacNeill

It’s a major signing for the club. Sam, who was Premier League Riders’ Champion in 2011, has been racing in the World Under-21 Championship which recently finished in Argentina, and he was tenth overall. His signing will come as a surprise for everyone, and he admits “I’m surprised myself!”

The move actually came about through Facebook, on which he contacted Edinburgh to let them know he was available.

“I wrote on there a couple of days ago, but I didn’t know if anyone had seen it.”

In fact John Campbell’s son Gordon alerted his dad, who moved quickly to get in touch with the Aussie and make the necessary arrangements.

Sam comes on loan from Somerset. He can reflect on a 14 point score on his last Armadale appearance, unbeaten in his first five rides, and his record suggests that he will be a major acquisition home and away.

He said “I hadn’t previously gone that well at Armadale but I had some help from Josh Grajczonek and I had a good meeting that night.”

That October visit was as a guest for Scunthorpe, and Masters was unbeaten in his first five heats that night. He also scored a late season maximum guesting for Glasgow, and featured in Poole’s Elite League side who just missed out on the title.

He will be hoping to double up again in 2013. “I hope I will, I haven’t got anything organised yet but I really need it.

“I’ll still be based down in Somerset, I’ve got a good workshop and I live with a good family there. I’ll be staying up in Edinburgh some of the time.

Sam won’t be resting during the Australian summer. “I’ve got the State titles this weekend, and the Australian titles in January, but I’ve just got home and haven’t really organised everything yet.

“I intend to be over in Britain well before the start of next season.”

Monarchs’ director John Campbell said “I’m really pleased with the signing, I believe Sam can put a point on his average with us.”