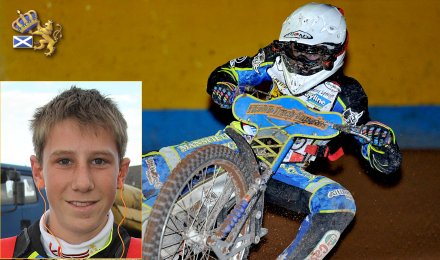 MAX IS A MONARCH

The Scotwaste Monarchs have signed the highly-rated 16 year old Australian Max Fricke as the sixth member of their 2013 team.

Max of course appeared at Armadale last season in the Stormy Wethers Testimonial, and scored a very creditable 7 points. He is busy racing back home at the moment and will compete in the qualifier for the Australian Championships early next month.

Max has ridden at Gillman today, winning all his races while trying some setups, and he will be heading for Mildura, where they are staging the Jason Lyons Tribute Meeting tomorrow.

He is keenly anticipating being a Monarch. “It should be good, I’m very excited about it and it should be a good place to start my British racing.

“Armadale was one of my favourite tracks to ride in the UK and that was one of the big reasons I decided to go there.

“I know Sam Masters, he’s a good rider out here so it will be good to have someone in the team that I know. I didn’t have a chance to meet Craig Cook because he got injured the night I was there.”

Max and his dad Rodger have been keeping busy riding in as many meetings as possible. He added “I’ve been riding quite well here in Australia, this is the building blocks trying to slowly progress. Each time I get on the bike I seem to be improving in some way.”

“It sounds like I will be staying close to the Armadale track, that will be a good thing.

“It can take a while to learn all the tracks but hopefully I can do that and help the team.”

Max certainly impressed with his professionalism on his visit last season and that will be his aim again. “I am bringing one bike over and two engines, and hopefully try to get another bike over there, or at least a rolling chassis.

“I’d like to hold my 5 point average but I realise that will be quite difficult.”

Max has already ridden overseas, having spent some time in Denmark. “At the moment I haven’t got anything like that planned, it’s just what we’ve organised with the Monarchs at the moment.”

Rodger Fricke will accompany his son for the early weeks of the season, to assist Max’s pre-season organisation and meet the family he will be staying with.

He says “Max is very professional and organised, and we hope to be over a couple of weeks prior to the season to ensure that everything is right for him.

“Max was mindful that he really enjoyed the club, and the track was a little bit technical which he sees as a challenge.

“There has been some interest from Poland in getting some practise there, and also Denmark where he enjoyed riding last year, but he will only go to ride over there if it doesn’t interfere with his riding for Edinburgh. Edinburgh is his number one.”

This important signing has been the result of some hard work by a number of people and we thank them all for their contribution.

His appearance in the UK will be subject to a visa being issued by the UK Authorities and subject to BSPA approval.