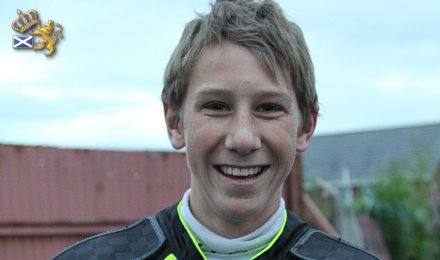 MAX FRICKE IS AUSSIE UNDER-21 CHAMP!

16 year old Max Fricke scored a brilliant victory at Kurri-Kurri today when he came from last to first in the A Final to win the Australian Under-21 Championship.

Max thus follows in the footsteps of former Monarch Rory Schlein as well as many other great Aussie riders. He is certainly one of the youngest winners at 16 years and 9 months; Leigh Adams in 1988 may have been about a month younger.

Max of course was a very happy young man after the meeting. He said “It’s perfect, I never would have thought it, I’m really happy.

“I didn’t even make the gate, I was last off the start, coming in to turns three and four of the second last lap I was in about third, and when I came out of the corner I was in front – I didn’t know where they went. I thought they must have crashed!

“The track wasn’t too bad, a bit slick on the inside. The inside line wasn’t working all night, but it was working in the final which was good.”

Supporters listening on All Sports Radio on the internet will have been as astounded as the commentator as Max didn't get much of a mention in the early stages of the race, only to come galloping through the field past Alex Davies and Justin Sedgmen, and finally Taylor Poole.

It is a win which will have everyone in speedway taking note, not least Aussie team manager Mark Lemon who must feel he has a new sensation on his hands.

Having said that, Monarchs will put no unreasonable expectations on the young man's shoulders when he starts his UK career in just over two months time. Max realises that: “I know it will be very hard in the UK.”.

But for now he needs to do nothing but celebrate. He had support from a Monarchs’ team mate at the meeting: “The other riders were all good with me, and Sam was here tonight so I was happy to see him. I’m looking forward now to coming over to the UK."