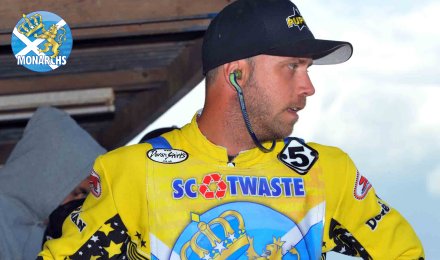 LET’S GIVE THEO A BOOST

Very much the unsung hero since his return to the team at the beginning of 2012, Theo Pijper has had some tough times recently but last night’s events probably hit him harder than anything.

Explained Scotwaste Monarchs co-promoter John Campbell, “Theo is always Mr Positive. He brushed off any suggestions that his recent broken ribs were giving him any pain and laughed off any suggestions that having skin removed from his nether regions in the same crash was anything more than a scratch. He’s continued racing and scoring vital points, particularly in our away wins at Somerset and Newcastle.”

“However, when I spoke to him just before he left the stadium last night he wasn’t his normal self and having contacted him on Saturday morning I can understand why. The World Long Track Grand Prix is an important part of his racing calendar and his first two meetings this season have not gone well for him. His also had two or three hefty crashes recently that have drained him physically but his, completely out of character, pile up in heat 7 on Friday night has left him with a big bill to get back mechanically to his peak.”

Said Theo, “I’ll be able to rebuild my wrecked bike but it’s an unexpected bill. Even worse was when I discovered that my crash helmet had suffered a crack in the crash and that means it’s only good for one thing now and that’s the bin.”

Continued John, “Theo’s had a really rough two or three weeks and his head has gone down as low as I can remember. As a Club we’ll give him as much help as possible but I would ask every supporter to give him every encouragement especially at Workington on Saturday night. Theo needs a boost at the moment and I’m sure that we can all help in getting him back to his normal happy self.”

Tonight's match at Workington was unfortunately called off just after two, but it will give men and machines time to recover. Heavy overnight rain had made the Derwent Park track very wet and with increasing shower activity anticipated from late afternoon onwards the Comets promotion decided that there was no chance of the match going ahead.