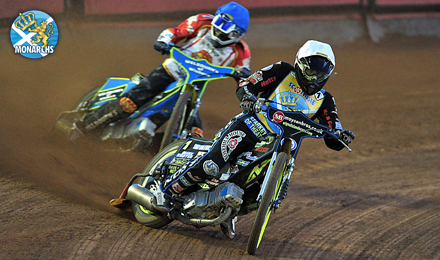 NO POINTS, NO LUCK

We failed to get a league point for the first time this season on a disappointing night at Leicester, losing 50-40.

On the plus side, Craig Cook scored 14 and incredibly broke the track record three times - heats 1, 5, and 15. The new time is well over a second better than the record as it stood before the meeting at 60.31 - and the previous holder was Cook anyway!

Claus Vissing and Theo Pijper both scored 9 points, winning a race each, and the other success was Liam Carr, again very impressive with 3+1 including defeating both Graversen and Nielsen. The young man is talented, and was unlucky to be excluded in a tough heat 14 first corner attempting an outside pass.

The riders who were well below par, both with crippling machine problems, were Derek Sneddon and Jozsef Tabaka.

Derek (who scored 2 from 5 rides) said "I rebuilt the bike which was wrecked at Somerset, but it just wasn't right. I had to use my Armadale bike but wasn't nearly fast enough."

In the case of Jozsef, he had a series of problems. Clutch problems, electrical problems, chain problems were all mentioned, but the bottom line is that he probably didn't finish a single heat under power.

He had shown glimpses of very good form, coming from the back, leading heat 10 when he stopped, and even in heat 14 he had taken the lead when the race was stopped due to Carr's fall. In the rerun he trickled round barely under power for a point.

Cook's riding was quite incredible at times as he swept ahead and won by huge distances. His only dropped point came in heat 11 when he was clamped on the inside line and took three laps to catch Nielsen, too late to go after Magnus Karlsson.

With functioning machinery against a Lions' team which included three new members plus a rider replacement for Doolan, we would have expected to do a lot better and possibly win. However for once things didn't work out for us, so we will put this behind us and move on.