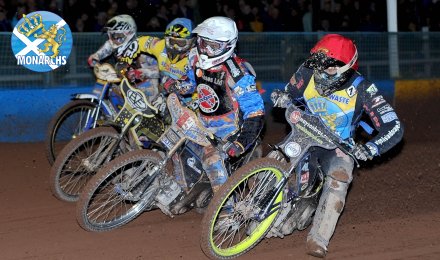 JOZSEF INJURED AS WE WIN BY TWO

The Scotwaste Monarchs took a 2-point advantage, 45-43, from a hard-fought first leg of the Premier Playoff Final which was sadly overshadowed by a bad accident in which Jozsef Tabaka has been injured.

This happened in heat 9, in which Joe and Nick Morris were contesting second place. Unfortunately Nick ran into the back wheel of Joe on the third bend of lap two which straightened Joe up and sent him at high speed straight through the fence.

The regrettable news from the hospital is that Jozsef has a compound fracture to his fibia shin bone. We wish him well and will give updates as we get them.

As far as the match is concerned, Monarchs were struggling to establish a lead anyway, and only Craig Cook and perhaps Liam Carr really produced their best form. We did take the lead in heat 2 with an excellent 5-1 and only lost the lead briefly at heat 8.

Derek Sneddon's engine failure at heat 4 which caused him to switch machines probably had a greater effect on the score than Jozsef's injury because Derek unusually could not get out of the start, and didn't have the scoring power we were looking for.

After Deek's engine failure which resulted in a 2-3 heat loss in heat 4, we held a 3-point lead up to heat 8 when we disappointingly lost a 5-1.

Morris was excluded from heat 9 for dangerous riding, and Rose was also ruled out for having left the track after a fall, which meant we got a gift 5-0 to give us a 4-point lead. We had in fact held a 5-1 advantage when the accident happened.

We took a 4-2 from heat 10, then Theo Pijper handed Jason Doyle his first defeat of the night in heat 11 with a brilliant burst off the second bend.

Charles Wright crashed in heat 12, just as Claus Vissing rounded Alex Davies, but in the rerun Davies was wise to the move and blocked it to take the win.

Craig Cook won heat 13 but we couldn't get an advantage, and with Jozsef Tabaka out of heat 14 we lost that 5-1. All that remained was another Cook win to ensure the narrow victory in heat 15.

It was a good crowd for the match, and a good atmosphere, but heat 9 did put a big damper on things. We head for Somerset on Monday to do the best we can, but we will miss our Hungarian favourite.