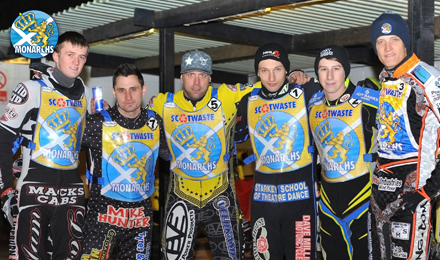 GREAT SHOW BUT REBELS ARE CHAMPS

The Scotwaste Monarchs rode out of their skins tonight to push Somerset right to the wire, before going down 49-44 on the night and 92-89 on aggregate - so t is congratulations to Somerset Rebels who are worthy champions.

The track was wet after a heavy shower about 6:20, and the result was that everyone had to ride on a ribbon of track round the inside line. It made gating crucial though there were a few overtakes in the second half of the meeting.

With just a two-point lead from Friday, we didn't start favourites, and we started by losing the toss and a first heat 5-1. These two factors were not unrelated as each of the first three heats was won from gate one, with the riders off gate 4 getting just a single point.

Craig and Max did seem to make decent starts but didn't get to the bend, and Craig eventually retired at the back.

Remarkably our first rider to make a real impact was Liam Carr with a brilliant win in heat two - believe it or not, in the fastest time of the night! The boy has done a great job for us.

That heat was shared, and we lost a 4-2 in heat three, though Claus looked impressive and pushed Alex Davies hard.

Theo got a blinder of a start in heat 4 and led all the way, and in heat 5 we drew level on aggregate with a 5-1 from Craig and Max! We certainly were not going to make it easy for the Rebels.

We were a bit unfortunate in heat 6 in which Theo and Liam were together behind Doyle, but they were too close and Liam could not get to the inside line. This gave Newman a chance to slip past for the point, in spite of a terrific effort by Liam to regain the position.

Claus and Derek shared heat 7 behind Grajczonek, but we lost a 4-2 in heat 8 with Derek getting between Newman and Wright. We were six down on the night now.

Heat 9 didn't go to plan as Theo held second behind Morris, but was passed by Davies with a good move from the Aussie. However this did have the effect of putting us 10 down.

We didn't use the TR in the next heat, and we were on a 1-5 from the tapes. Doyle was miles clear but an excellent move by Derek round the outside took him past Newman, and Claus then followed him through on the last lap.

So we were still 10 down and were then able to use Craig on double points. He won heat 11 but not without a strong challenge from the impressive Grajczonek.

The score on the night was now 38-31 and we were still in the hunt.

Claus was really on song and made a great start to win heat 12, but Derek lifted at the gate and just failed to pass Greenwood - a useful contributor for the Rebels.

There was due to be an interval now but as the rain was starting again they wisely pressed on. Craig made the start in heat 13 but this time Grajczonek found a terrific outside line and went past to win.

We now needed two 5-1s to win the league. And we gated in heat 14! Claus was the r/r for Jozsef in this one and made no mistake, but Derek was caught by Davies who rode very well for the home side.

We needed a 5-0 now which was obviously unlikely, but we finished strongly with Craig winning yet another heat 15, blazing round a wide line, and Claus taking third.

We had fallen just short but had done ourselves proud. We needed a few more points from Friday and should have had them.

Craig was brilliant once again after heat one, and we saw the best of Claus, which we would have loved to see more often this season. Everyone else did their bit and whilst this might not be the strongest team we have ever had, it is a team with great character which can perform well when the chips are down. Well done to them all.