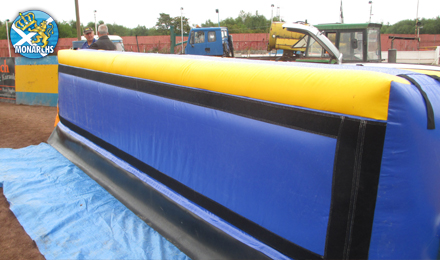 Funds continue to mount in the air fence fund as the time is fast approaching for an order to be placed for the air barrier.

The Cub's directors met earlier in the week to make a final decision on the purchase of an air barrier to be installed at Armadale by the start of next season. But for a clarification of a couple of items it seems certain that the order will be confirmed within the next few days.

The air fence fund has continued to increase in the last week and now stands at £4562.44, a small increase from last week and some way short of the deposit we have to pay on ordering the fence. That will be the first major obstacle to overcome.

The fund should take a major boost in a fortnight's time with the staging of the Audience with Craig Cook. This event is certain to be a sell out as only two tickets remain at the moment. Once these tickets have gone then the hall will be at maximum capacity.

Prior to this big event Craig Cook has taken the opportunity to fly to Tenerife for a short holiday.

The Club will be happy to hear from anyone who has an idea for additional fund raising during the close season and will offer every assistance possible to promote the idea.