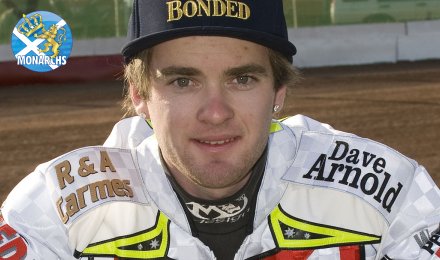 Australian Justin Sedgmen will return to UK speedway in 2014 after a year out, and will be in the colours of the Scotwaste Monarchs.

He said “Obviously I’m really happy to get back into a good team for next season. I’ve worked pretty hard to get it, so when Edinburgh came asking I jumped at the opportunity. I want to knuckle down and get into it.”

He has been riding alongside Max Fricke in Australia, and both were finalists in the recent Victorian State Championships. “Maxie was starting juniors as I was finishing, so I had a little bit to do with him. In the last year I’ve had a fair bit to do with his dad Rodger. In Adelaide I told them I was keen to get back over and Rodger put in a good word for me.”

He last rode over here for Redcar in 2012, but he has visited Armadale in the colours of Somerset, Birmingham and Newport, being paid for double figure scores on his last two visits.

His visits left him with a favourable opinion of Armadale. “I think I’ve been to Armadale three or four times, the first time being my first year in England. I really do like the track, firstly the shape and also that it is always well prepared. It’s one of the clubs I most wanted to join.”

Justin was just 17 when he first came over, and has shown undoubted promise without fully establishing himself. This time he believes he will put that right.

One of the main reasons for optimism will be the preparation he has done. “I’ve bought two rollers off Hans Andersen, I’ve got an engine in England and I’ve got two here as well. I should be well prepared for the new season which is good because I’ve never really been in a good financial position for the start of the season, I’ve always been pushing the boundaries a bit. But this year it’s going to be good, I know I’ve got plenty of money behind me. I’ve worked for twelve months and by the time I get back that will be nearer 18 months.

“It’s a good feeling to have, knowing that you’ve worked for a year and done everything properly to get back racing in Britain. A lot of people take a year off and don’t do anything but I knew what I wanted to do and I’ve done it right.”

Sedgmen is a Swindon asset and the Monarchs wish to thank Alun Rossiter and the Robins for helping to bring the deal to fruition.

Justin said “I’m not 100% sure yet where I’ll be staying but initially I might be in Swindon, I’m still a Swindon asset and I’ve got good connections there and a good bunch of friends. I might stay in Edinburgh for the weekends or something like that.

“I hope to double up eventually but to begin with my main focus is on Edinburgh. I want to concentrate on one thing and get it right, get to the potential I know I can ride at.

“I won’t rush to take anything else because sometimes what seems to be an opportunity isn’t really an opportunity. There’s no point earning a little more money if you’re not riding well. If I just concentrate on Edinburgh and ride the best I can for them, hopefully the fans will like me. I know they always support their home riders very well.”

He is very keen to impress with his new club. “If I can ride as well as I know I can then I’m pretty sure the Monarchs’ fans and management will be happy at the end of the season.

“With Craig and Sam in the team there will be a few of us fighting for the numbers one and five positions. I hope we can work together and have a really good team.”