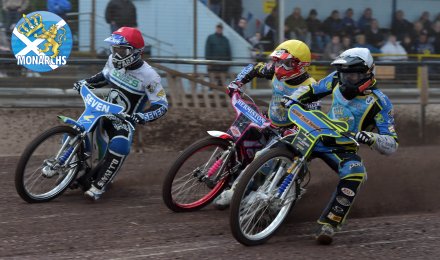 THIS TIME - A DRAW

You know you've got a good team if you come away from Ipswich feeling slightly disappointed with a draw!

It was a fiercely contested encounter at Foxhall Heath, and we certainly didn't get the breaks over the piece, but being realistic about it there was always going to be a night when that happened.

But far better to concentrate on the good things, all riders of both teams completely committed to their cause in a match which see-sawed, not least because gate two was pretty hopeless and handicapped the rider on it over the closing races.

We made a terrific start with an opening heat 5-1 (off gates 1&3) and helped by heat wins for Stevie Worrall in heats 2 and 4, we built up a 6-point lead by heat 5.

In the latter race Morten Risager held off a fierce charge by Craig Cook to win by a wheel.

Heat 6 was disappointing because it was the only time Sam Masters made a gate all night, only for the race to be stopped when Aaron Fox fell at the back and couldn't clear the track. We lost a 4-2 in the restart.

Heat 8 was the first of the controversial decisions. The Witches gated but Justin Sedgmen, riding very well all night, passed Manzares down the back straight and went into the third turn in front of Manzares. The American came down and Sedgmen was harshly blamed.

We lost that heat and the next 4-2 and the scores were level. Richie Worrall and Manzares then took a 5-1 from heat 10 and we had slipped from 6 up to 4 down in a run of 5 heats, significantly being off gates 2 and 4 in 4 of these.

However as we have done so often, we fought back. Sedgmen passed Ellis in heat 11, won by Cook, and we saw the best of Steve Worrall in heat 12. Up against the unbeaten Risager (who was on that gate 2), he drove the Dane wide and made a big hole up the inside which Max Fricke gleefully went through.

They took an easy 5-1 and we were two ahead again. Then came more controversy.

Even off gate 2, Craig went ahead in heat 13, and Sam Masters turned back to grab second up the back straight. Richie Worrall went under him at the next bend, and Sam came down. While it was further round the bend, it was quite similar to heat 8 but again the decision went against us.

Craig was warned for moving at the second attempt, then missed the gate and in spite of a huge effort he was thwarted by an excellent Worrall - Tungate team ride.

So we were two down again! However with Steve Worrall romping clear, Derek Sneddon fought a great rearguard action to keep Heeps at bay and give us a two point lead into the last race.

We were on 2 and 4 again, and although Craig tried a fierce cutback and Steve a big run round the outside, the best we could manage was a 2-4 which left the teams even in the end.

A fair result? A good two points for the away team? You could say yes to both of these but then again, we could and probably should have won. But that's fourteen matches unbeaten so far, an amazing effort by a remarkable team.