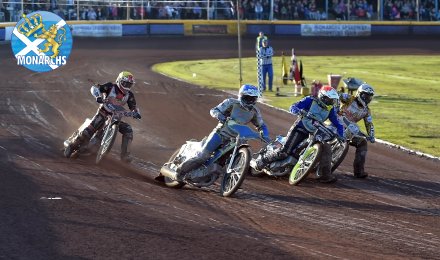 Another 5-1 on the way Image Credit: Ron MacNeill

WERE WE GOOD OR WERE THEY BAD?

The Scotwaste Monarchs ensured that they stayed unbeaten for the 15th successive match this season, winning 58-32, though in truth the opposition from Glasgow was extremely disappointing to everyone, not least their own support.

The score does not really reflect how superior Monarchs were. They led 44-16 after 10 heats but threw away several points over the closing stages. It didn't matter much, the match was long since over, and it has to be rated one of the poorest Scottish derbies for a long time.

Mercifully Kevin Wolbert came to life in his latter races and brought out the best in Craig Cook, who won heats 13 and 15 in spectacular fashion. These were just about the only races worthy of the name.

Apart from young reserve Max Clegg who was guesting for Aaron Fox, the Monarchs' scorechart was full of wins and paid wins, with Cook on a paid maximum and Justin Sedgmen only dropping a point in the final heat.

Max Fricke looked sure to finish unbeaten too until he accidentally brought Mark Lemon down in heat 12, earning an exclusion.

Steve Worrall won three heats, Derek Sneddon was unbeaten till he took a fall in heat 9 (blinded by the sun!) and Sam Masters scored 8 – it was all too easy.

Tigers did have their injury problems with Dimitri Bergé still out, and Rusty Harrison suffering from headaches. But other than Wolbert, only the two wins by Anders Thomsen brought any joy to the red and white ranks. The visiting fans deserved better.

Mark Lemon did score well enough but he has certainly ridden Armadale better. Theo Pijper was apparently suffering from a foot injury sustained in Holland on Thursday, which perhaps explained his three-point score. Guest André Compton did little to justify his inclusion.

Monarchs now head for Newcastle on Sunday while Glasgow must be wondering what to do next.