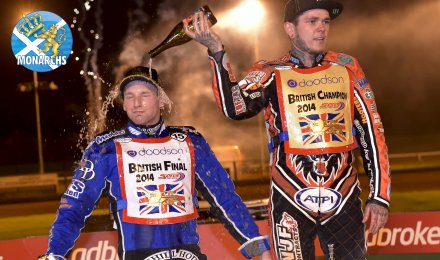 The World Champ shares his champagne with Britain's no. 2 Image Credit: Ron MacNeill

A stunning ride by Scotwaste Monarchs' no. 1 Craig Cook in the three-times rerun final race of the British Championship saw him come through to second place behind World Champ Tai Woffinden, a great result which also ensures that he picks up the wild card place at the Cardiff Grand Prix.

It's one of the best ever individual performances by a Monarch as well as a milestone in the rising career of Craig Cook. He said "British Champion would have been nice but Tai is a great champion and I'm very happy with what I've done."

Craig scored 13 points in the qualifying heats with some fast gating and intelligent riding. He was joined in the final by Ben Barker also on 13 but with Craig rated ahead as he beat Ben when they met.

They were joined via the semi by Tai Woffinden who had scored 12, and Chris Harris, with a disappointed Scott Nicholls excluded for bringing Chris down in a hard race. Jason Garrity was the other semi finalist with a highly promising display.

Craig took gate one in the final, with Barker on two, Woffinden three and Harris on the fence.

At the first attempt Craig was well away but Barker came down - all four back. Next time Craig didn't make a good one and spun off as he tried to move Barker over - all four again. Third time Woffinden and Barker clashed with Ben on the deck again, but it was all four back once more.

Finally they made it round the first corner with Woffinden in front and although Craig was well placed, he made a big mistake and swung wide, dropping to the back.

That might well have been curtains but with a ride which was extraordinary at this stage of the night, he cut under Harris coming off the fourth bend, then a lap later pulled off the same move on Barker! He still had to withstand a ferocious challenge from Barker with the Cardiff place on the line, but he did it and he's there.

In the qualifiers Craig had won his first two then lost to Harris. His fourth ride was off gate four and he did very well to cut past King, Worrall and Bridger down the back straight. He was now in the driving seat and knew that a second place to Tai in heat 17 would make him top qualifier, so that's what he concentrated on getting.

Had the rules been as they are for the semis Craig would have been champion at that stage, though we're not advocating that. Nice thought though!

In the eyes of those who watch him regularly Craig Cook has been the no. 2 British rider for a while, but he had still to prove it on the big stage. Tonight went a long way towards that aim. Onwards and upwards.