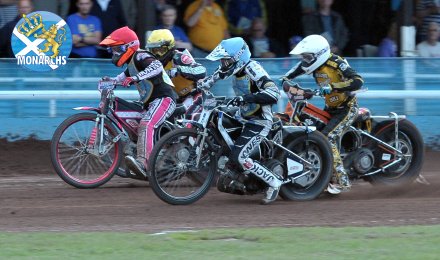 ANOTHER WIN ON AN EVENTFUL NIGHT

The Scotwaste Monarchs made it 20 matches unbeaten by defeating Rye House 57-38 at Armadale, even though the Rockets took two 8-1 heat advantages!

These were both due to their excellent opening pairing of Edward Kennett and Luke Bowen. However they did not have enough support – evidence of that being that Nathan Greaves (who rode well for a first-timer at Armadale) was eligible for heat 15 with a 2-point score, which made him third highest for Rockets.

The reason Eddie Kennett didn’t come out for the heat was that he had blown his engine as he won heat 13. That was a pity because the crowd surely would have liked to see him cross swords with Craig Cook again.

Cook scored 13+1 but even he was upstaged by the highest scorer of the night, the incredible Stevie Worrall, surely the best rider ever to be signed on a 3-point start-of-season average! The superstar reserve had a six ride paid maximum, and kept things steady when one or two of the teams had slightly below-par nights.

Sam Masters scored 9 and Max Fricke 8, but both were on the wrong end of these 1-8 debacles, Derek Sneddon had an improved night, but Justin Sedgmen and Aaron Fox will be a little disappointed with their scores.

Of course heat 14 was a talking point. With Worrall in front, Jason Garrity (who only finished one race) got into second ahead of Derek Sneddon but Derek challenged again, and the two brushed together crossing the finishing line at the end of lap two. In fact replays show that Garrity leant across into Sneddon. Garrity’s chain came off and with Greaves already a faller, Monarchs scored a 5-0.

At the moment we’ve decided to say nothing publicly until we can take stock of everything that took place in the aftermath, but it might not be the end of the matter.