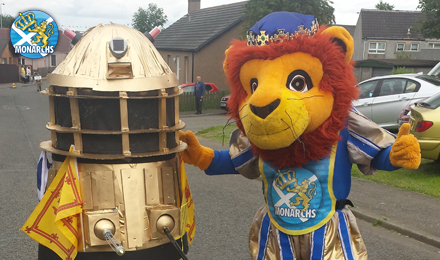 GREETINGS FROM UNCLE B (LXV)

Ed the Monarch had a wonderful time last Saturday afternoon entertaining thousands of people who had lined the streets to watch the parade as it wound its way through the streets of Armadale at the annual Gala Day!

He recognized many of his fans from a Friday night and made sure they got a special wave as he endlessly crossed from one side of the street to the other. Many in the crowds hadn't seen him before and we can only hope that they may find their way to the speedway in the future. He made many friends including his new pal, Dale the Dalek! I think we will have to consider entering a float next year with a bike or two and a couple of riders!

The weekend really started on Thursday for me as I made the trip down to Sheffield for the League Cup fixture. We were always going to qualify for the final but, after that was assured around heat 8, the spotlight was on whether we could win the match to maintain our unbeaten run. The scores had been neck and neck up until heat 10 but then we steadily drew away and Derek's timely heat 14 win put us eight points in the lead and we were up to nnnn-nineteen! Incidentally, I saw Tai Woffinden and Sam Ermolenko in the pits. I think they had made their way to Owlerton after hearing about the spectacular Scotwaste Monarchs 2014! I hope they were impressed. So, I made my way back to my hotel and celebrated with a small refreshment or two!

We were greeted with yet another quite acceptable mild Friday evening for the home match against the Rye House Rockets. More like damp squibs! On reflection, that's a bit unfair. Not many teams score two 8-1s away from home! Still, it was another home win and we marched on to 20 in a row unbeaten!

This week the Peterborough Panthers are the visitors with our pal Ryan Fisher back at Armadale. Although they have a strong top three in Bjerre, Ostergaard and Fisher, I think once again we will be too much for them at the other end and will make it 21! It will be a good test for us though and I can't see us hitting the high fifties as we've been doing regularly. I hadn't realized that our average home score is over 57 and that's some going!

As usual it was good to see you all last week but I must apologize if I missed you on the way in as I was struck by the most horrible hay-fever which started in the Sheffield pits of all places! I suppose with that the centre green was the last place I should have been on Friday but the entertainment from there was good! Have a fine week and I'll see you on Friday. Be good and take care!