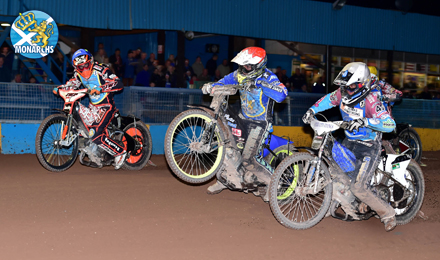 The Scotwaste Monarchs travel to Workington on Saturday evening for their final Play-off qualifying match knowing that one group point will guarantee a place in the final.

Having won all three of their Paly-off matches so far the Scotwaste Monarchs have the luxury of knowing that even a defeat by six points or less will be sufficient to take them to the final. Of course it will be normal procedure for the Monarchs and every attempt will be made to win the meeting.

The Scotwaste Monarchs had a scare first thing this morning. After his big crash in heat 12 last night Derek Sneddon woke this morning with sever pain in his wrist and elbow. Thankfully a trip to hospital for an xray confirmed that nothing was broken and Derek will ride on tonight.

There has been no report from Workington today about Rene Bach or Kyle Howarth, who both withdrew from the meeting last night so we expect them to be in the Comets line up. They also welcome back Joe Jacobs at reserve after he was called away last night to ride for Wolverhampton at Coventry.

There have now been two matches in the other group. Ipswich defeated Scunthorpe on Thursday and Scunthorpe defeated Somerset on Friday. It is too early to tell who is the favourite to win that group.