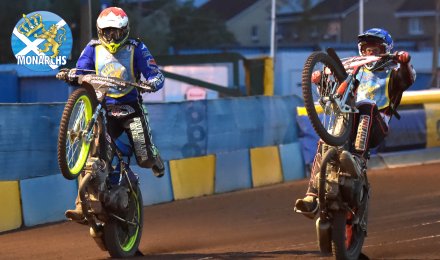 CRAIG AND SAM ARE BACK!

The Scotwaste Monarchs’ promotion went to tonight’s very well attended and raucous Video Night intending to announce the return of Sam Masters for the 2015 season, but finished up adding in Craig Cook as well!

Craig had made the journey up, as had Max Clegg, but during the interval session John Campbell said “We hope and expect that Craig will be back but Craig is hoping he can find a little bit more sponsorship to clinch the deal.”

That prompted two generous supporters to come forward and in just about no time, it was announced to a massive roar that everything was sorted and Craig will be a Monarch again!

That announcement raised the roof of course and Craig said “This club is where my heart is. Anyone who watched the Championship Final video will know how much it means to me.”

So the Monarchs’ no. 1 will spend tomorrow shopping in Princes Street secure in the knowledge that his Premier and Elite clubs are sorted once again.

Making it a glorious double, and true to what he had been saying from an early stage last season, Sam Masters will be back to race for Edinburgh next summer as Monarchs fight to retain their trophies.

Sam had a sensational season in 2014 and formed possibly the most formidable spearhead in the league with Craig Cook. He said “I’m stoked, couldn’t sign quick enough to be honest, especially after the year we had.”

He’s quite happy with the way the team is shaping up, and has been able to watch recent signing Rob Branford at first hand. “Rob will be good, he has a go a real good go. He’s been riding well. I hope Cookie’s back, me and him together are awesome.“ Well now he knows!

From mid season onwards Masters was in great form as Monarchs swept to success, and he has kept that up back home, winning the Victorian state title.

“I stuffed the NSW title up the other day, I top scored in the heats but then it started raining and I had gate 1, it was too far to the dirt. I just spun up. But Brady’s a good rider, and me and Max had a few good races, so can’t complain.

“I did the Aussie Longtrack on a 250cc and I won that. I won’t be doing any more meetings at Kurri, so my next meeting will be the Aussie title. It costs money to do these other meetings. I’m doing a bit of work with my uncle, and playing a bit of golf, though I’m useless!”

Sam will use similar machinery to last year. “I’ll be using the same bikes as last year, they were brand new at the start of the season. I’ve got another new engine, and obviously the engine I had at the end of the year was quite new.

“I want to try to get a few meetings over in Germany, and I’d like to do some practise before the start of the season. I’ll see what Sedgy’s doing.”

At the moment it looks as though doubling up is ruled out for Australians, a bone of contention with them all. “We need to move forward in the sport but it’s more of a stuffaround than what people think. People say what are you still in the Premier League for, but you have to understand that there’s less meetings in the Elite League for a start, and you get so well looked after in the Premier League. It could stuff our visas up as well, I don’t want to have another drama and miss another year.”