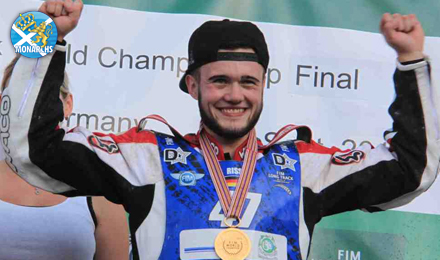 The Border Roofing Monarchs have been hit with the news that Erik Riss has broken his collar bone and is set to miss a number of our upcoming matches.

The injury happened after the heat three victory celebration with Justin Sedgmen went wrong and they both tumbled in front of the Monarchs fans on the back straight. Erik immediately complained that he had broken his collar bone when he returned to the pits and was examined by the medical crew in the track ambulance. They passed him fit to continue confirming that he still had great power in both arms, something that shouldn't be possible with a collar bone injury.

Erik continued racing with the help of painkillers although he was obviously in some discomfort. He then flew out to Germany on Saturday and had five more rides in an international four team tournament finishing that meeting in agony.

On Monday afternoon he visited his local hospital and x-rays have confirmed the break. The doctor confirmed that rest for four weeks would be the cure but Erik suggested that he must race again on Friday. He was advised that would only make the situation worse so Erik has reluctantly pulled out of the meetings on Friday and Monday.

At the moment the Border Roofing Monarchs management are considering their options as Justin Sedgmen will also miss Friday's match as he is away in Croatia for a World Championship qualifier.