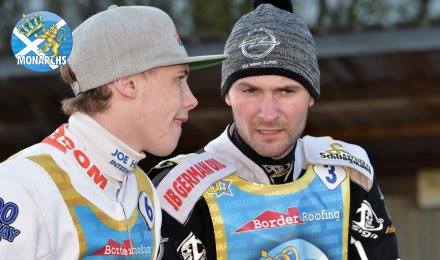 MAX, KEVIN AND BORDER ROOFING ALL BACK

The Border Roofing Monarchs made their first two signings for the 2016 season at the annual dinner dance tonight when Kevin Wolbert and Max Clegg were announced as team members for the new season. Further excellent news came as team sponsors Border Roofing confirmed they will be back in 2016.

Both Max and Kevin played a tremendous part in the trophy-winning season just past, with Kevin adding two points to his average and Max half a point on his.

We already knew how good Wolbert was but it was a pleasure to see again his smooth, hard riding, giving us a powerful rider in the middle pair which allowed young Erik Riss to develop without pressure. He was tremendously consistent on all tracks and we believe he is capable of raising his average again in 2016.

Young Max expressed surprise when we signed him this year but he repaid our faith. He became very impressive at Armadale and pulled off some of the best overtakes of the season. He still has to work hard on gaining experience on away tracks but we are confident that he can do that successfully and raise his average substantially.

Eddie McKenna got a big cheer for his announcement of the continuation of the team sponsorship. During his talk he stressed that hard work will be required as we try to face up to the challenges ahead.

Of course the dinner dance also marked the end of the five year Craig Cook era. In wishing Craig all the best for the future, John Campbell expressed his opinion that Craig could line up against all our greats from the past and beat them all.

Captain Craig in his speech gave full credit to all team members for the successes of the season and offered his thoughts on how they have all performed!

Do not worry too much if your favourite rider hasn’t been re-signed yet, it may well be just a matter of time as we sort out the details. We hope to make further announcements in the near future.