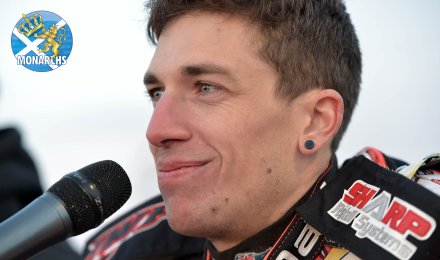 SAM RETURNS FOR THE THIRD YEAR

Edinburgh fans will be relieved to finally get the not-unexpected news that Sam Masters will be back for his third season in their colours in 2016.

Sam has been a massively popular Monarch over the past two seasons, having missed out on joining the club in 2013 due to visa issues. There has never been any doubt that he would be back at Armadale but as last year, he enjoys watching the internet speculation when his name is not announced early.

He is along with Craig Cook the holder of what is probably a unique achievement in speedway, namely that the two of them have clinched the Premier League title for their team two seasons running with 5-1s!

Heat 15 against Somerset in 2014, heat 13 against Glasgow in 2015 were the two heats which did the trick. Sam of course has also been part of winning Edinburgh teams in the Pairs, Fours, KO Cup and League Cup over the two seasons in an almost unprecedented burst of trophy winning.

As it happens Craig Cook and his girlfriend Charlotte have been out in Australia staying with the Masters family for the last couple of weeks. These historic 5-1s were probably far from their minds.

Sam said “I want to ride at Edinburgh because I’ve always enjoyed it there, I’m happy to do another year with them.

“I’m not concerned about being number one, it didn’t worry me before. It was injuries which held me back, I was out for seven weeks which was a struggle.

“I’ve been home, had a few weeks off, spent a bit of time with Cookie and I’m trying to get fit now.”

Sam thrilled the fans with his performance on that final night which proved to be his best meeting of the season. “I’d been persevering with this one engine which I’d had at the start of the year, but for some reason it stopped working. I kept getting told ‘It’s you, not the bike’ so I somehow got that in my head. Then I’d go to Poland and do all right, so I wondered why can’t I do that in the UK?

“I realised in the Championship Final, when I had a bad one at Glasgow, - something needs to change big time for tomorrow – so I used one of my Polish engines and it showed the difference right away.

“I’m happy to be riding for Wolves as well. In 2013 when I couldn’t get my visa, I should have been riding for Wolves and Edinburgh, and I felt that was going to be a good year. So finally I’m doing that next year and I want to progress more than I have.

“Last year I started good, next year I want the whole year to be good. Probably next year I might go full time Elite, I might have done it this year but I got held up with injuries which held me back a bit. If I’d kept riding the way I was before I got injured there was no reason I couldn’t have done that this year. But I’m happy with another year in the Premier League, Elite League, a few meetings in Denmark and most of the matches in Poland.

“Denmark race matches on a Friday which makes life a bit harder but I’d like to do everything I can in Poland.”

One change will be Sam’s base which will be down south. “I’ll be staying in Hinkley this year, between Coventry and Leicester. I need to find some good mechanics, or maybe Robbie will be able to spend a bit more time, because I’m not going to be able to do it. I’ll have Edinburgh Friday, possible a meeting Saturday, travel to Poland Sunday and Wolves Monday.

“I’ve been on to it every day but finding the right one is hard. I don’t just want one that’s good at working. I get along with Robbie, he’s good at what he does and we get along, I want anyone else I use to be like that so that we can have a good time.

“I don’t know when I’ll be over, I’ll think about that after the Aussie titles. The bikes I’ve got I’ll use again this year, I don’t need to build a new bike, just put some new stuff on them.”

Before then of course Sam will contest the Australian Championship but he is disappointed to be missing out on some of the state meetings. “I’m disappointed not getting to ride in the other State titles, I have had some time off and now I feel I’m ready to start riding again, but I can’t. Someone has kicked up a stink, I don’t know who, it might be something to do with the visas. But I’ll be doing the South Australian titles and the Aussie titles.

“Riders who can’t mix it or beat us shouldn’t be in the UK anyway. There’s not even four riders they need to beat in these meetings, they just need to come in the top four. Too many were going over who weren’t good enough.”

As runner-up last season, Sam will certainly be one of the favourites to win the Aussie title this season. “I’m not sure who is riding, I think Batchelor might be doing them. The tracks here are different to the UK, they are a bit easier to ride, the skill isn’t so important. If I rode like I did in the Championship Final and at Melbourne there’s no reason I can’t have a good chance.

“The aim is certainly to be back in the GP next year.”