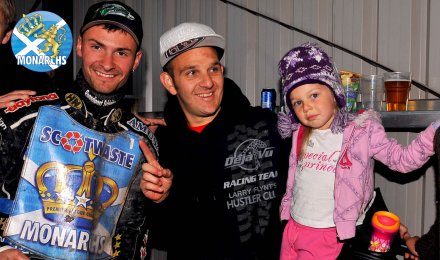 Ryan Fisher has been looking forward to his return to Armadale, something he has talked about regularly since he left the club in 2010.

He is certainly very enthusiastic about getting back into action. “I don’t think we’ve been this excited about a British season since we left Edinburgh, it’s an exciting time for all of us.

“I’ve definitely had some ups and downs since the Edinburgh days, with equipment and also the whole problem of visas, the whole deal’s been really tough, but I’m hoping this year to start with the best equipment that I can possibly have, better than any other year I’ve ever started.

“We learned a lot about my engines last year and at the very end we had something that was working really good. We’re definitely looking forward to it.”

Ryan of course is very much a family man and he has always performed better when they are all settled and their future is clear. He says “The family will be coming over but not until after they come out of school in June. That will leave me on my own until then. They’ll stay for a few months in the summer and then I’ll finish the season off on my own.

“I’m going to find a place up in Scotland, I think it will be easier with the travelling and I really enjoy living up there.

“I’m probably going to start with my existing engines, and put everything I can into making it the best I can with new rolling chassis.”

Of course riding at Armadale will be nothing new for the American but the only team member remaining from his previous seasons is Kevin Wolbert who was a team mate in 2009-10.

“Obviously I know Kevin from riding with him before, and Sam I know though not too well, just seeing him in the pits and talking to him, he seems a really nice guy.”

If things go well Fisher sees his return to Edinburgh as a long term thing. “I see myself having a few years back at Edinburgh I hope, if I can turn things around from what they have been in the last few years. Out of all the clubs in my whole career Edinburgh has been the best years and the most enjoyable. Obviously we had a lot of success, but also the whole team spirit and everything around it was really good. So we hope it will be similar to that.

“Last year I didn’t start with the best equipment and I blew my best engine up in the very first meeting. I couldn’t prove what I was able to do with the bike I was riding. This year with better equipment I think I can put at least two points on my average.”

He doesn’t rule out riding elsewhere though that can wait if it has to. “Right now I wouldn’t mind Elite League, I don’t see Poland being right for me at the moment because I haven’t got enough equipment. That’s what went wrong over there last time. My engines weren’t quick enough, they lent me a bike and I scored 11, but I could not afford to rent that bike every meeting.”

Fisher’s return was greeted enthusiastically at a packed hall last Friday when Monarchs staged their annual Video Night, and subsequently the online response has also been very good.