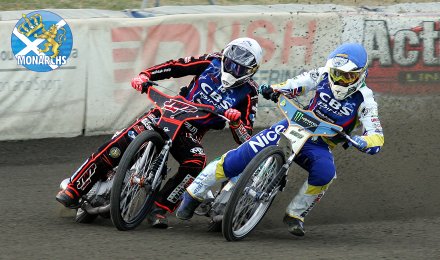 A VIEW FROM DOWN UNDER

We are again grateful to Howard Williams for bringing us his thoughts direct from the third round of the Australian Championship at Gillman on Friday night.

Despite making his third final in a row at the Australian championship for 2016 Sam Masters dropped valuable points and now finds himself three points behind new series leader Brady Kurtz heading into the final round to be held at Mildura in two days time. It was hard to put your finger on exactly why Sam dropped back in the standings and the only thing I can liken it to is the professional golfer who has a few unkind bounces and a couple of putts lipping out and ends up signing for a par score when with an ounce of luck it could have easily been four or five under. It was that kind of night for Sam.

Sams first heat saw him in white sandwiched in between Jack Holder (blue) and Brady Kurtz (yellow). A fine start and turn one by Holder thwarted Sams move around the outside and even though Sam momentarily got his nose in front Holder was able to get his wheels in line that little bit sooner and pull away exiting turn two.. While that was going on Kurtz had cut back off turn 2 and he also joined Holder in passing Masters and Sam suddenly found himself back in third. Never much in it after that and it seemed at times as if Holder and Kurtz were inadvertently team riding against Sam and the positions remained unchanged so it was a disappointed Sam having to settle for the solitary point.

The first lap and a quarter of Sam's next race will go down as one of the most thrilling fifteen seconds of speedway I've ever seen. Max Fricke gated and many in the crowd (including myself) probably thought "race over". After starting from gate four and not having much luck in turn one Sam came from nowhere down the back straight to dive under Max at frightening speed going into turn three and into the lead. Not unexpectedly Sam ran a little wide and Fricke returned the favour and regained the lead. Undaunted Sam yet again went under Max at the start of lap two and this time he made the pass stick and a welcome three points was added to his tally.

Heat 9 on the program was Sam's next outing and in the first attempted running of the heat Sam was well away out in front with Rohan Tungate in a very uncustomary last place and not all that pleased with himself. Desperate to not drop too many points to the leaders Tungate tried to go round the riders in front of him but came to grief with the race stopped and Tungate excluded. In the rerun Mason Campton proved very stubborn out of red and it took Sam the best part of a lap to claw his way to the lead. Campton then spent the remainder of the race on Sam's back wheel keeping him honest but it was another three points in the bag and the ship was gradually being righted again.

Bizarre was the only word for Sam's next programmed ride. In a rerun heat after Kerian Sproule had earlier fallen and been excluded in a heat that Sam was again leading, Sam inexplicably found himself in third behind Cooper Riordan and Alan Macdonald who up till that point hadn't exactly been setting the world on fire. When Sam finally got by he did so in style by storming through a gap between the other riders and from third to first in a very short distance, He then proceeded to pull away. Another three points and a final of some sort was looming, the only question was which one.

Sam's final heat ride was as tough an assignment as anyone had been given all night, starting out of gate four in yellow with the fast starting pair of Nick Morris and Justin Sedgmen inside him. At the first time of asking it got rather hectic in turn one and Sam was nearly wiped out by one of the other riders. Nothing deliberate, just a case of everyone wanting the same piece of track at the same time and the race was stopped. Back they went to try again. At the second time of asking Sam got a good start and went round the outside but Sedgmen had got an even better start and was already occupying the piece of track that Masters had his eye on. Morris has also been handily away and when the dust settled Sam was back in third with two rather brisk young men in front of him and try as he may no advancement of places was possible so just one point and a total for the evening of eleven which put Sam into the B final.

The B final line up was Morris on the inside with Masters, Fricke and Holder in that order across the track. Uncompromising would be the best description of the first lap with little separating all four riders. Gradually Sam was able to gain a bit of a break on the field and he held it to the end to secure a berth in the main final. As he did in the final at Undera Sam ended up in yellow out of gate four and again it was a tough ask up against Sedgmen, Kurtz and Tungate who had all been riding well. After a very even start it wouldn't have been a surprise who ever emerged out of turn two at the head of the pack and it turned out to Brady Kurtz. Unfortunately for Sam he was shuffled back to last and that's where he stayed all race and all he had to show from the final was one extra point to make his score for the round a total of 12.

The series moves on to Mildura for the final with Kurtz on 43, Masters and Tungate on 40 with Fricke and Morris another three points back on 37. An additional unknown quantity is that Mildura isn't everyones favourite track and the mental approach between now and the final round could be all important..