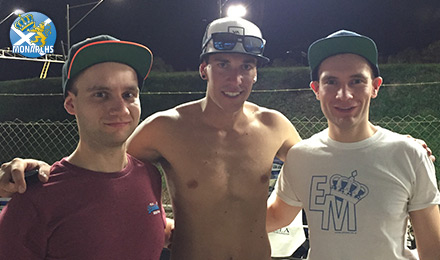 John Campbell's son's Graeme and Gordon with Sam at Mildura

We are again indebted to our down under correspondent, Howard Williams, for sitting up into the early hours to bring us his report on the final round of the 2016 Australian Championship.

One point. One bl**dy point !! After four rounds in three states with a total of 88 races that's how many points Sam Masters came up short by in finishing second to Brady Kurtz in the 2016 Australian title with the champion not decided until the very last race at Mildura. What that statement hides is what a wonderful, entertaining, dramatic, thrilling and enthralling contest it was. It was one of the most enjoyable series I've seen and probably unfolded that way because the two or three stand out Australians (Chris Holder, Doyle, and Batchelor) were absent and the top six or seven who did ride were incredibly evenly matched which generated interest in just about every single heat.

Kurtz was in the box seat but any dropped points could prove vital. Sam’s first ride was a beauty, he and Jack Holder gated side by side with neither willing to budge early on but Masters gradually inched ahead and pulled away. Three points in the bank and with Kurtz dropping a point the gap was narrowing. Tungate and Fricke had both won so they were off to good starts. It was now

Sam’s second ride was a tough one up against Justin Sedgmen and Kurtz. Although Justin was out of contention for the championship after a bad round at Undera he was always shaping up to be spoiler on his home track. Sedgmen was electric out of the start with Sam tucking in behind to register a second place. Kurtz was adrift in third and now it was getting very tight. Fricke had won an epic see sawing battle with Morris but Tungate had been unhappily excluded for touching the tapes and was seemingly easing himself out of contention. Tungate had a few words to say at the presentation afterwards in the direction of the referee and it would not surprise if Tungate found himself a little lighter in the wallet very shortly. Progressives were

Heat nine was Sam’s next outing and with a very neat gate in red from gate one got Sam to turn one in front of Fricke in blue. Sam seemed content to protect his outside going down the back straight and Fricke seized the moment to dive as clean as a whistle up the inside where there can barely have been enough room. Either a lapse from Sam or an opportunity seized by Max depending on your point of view. Kurtz had found himself in a heat against some of the lesser lights and won easily as did Morris. Sedgmen was continuing his rich vein of form with a sublime ride to get the better of Tungate. The tale of the numbers thus far was still tight although Kurtz was still narrowly ahead. Each Kurtz win was going to make it tough for those more than one or two back

Sam’s next assignment was against Tungate and there seemed to be a close rival bobbing up in every heat. Tungate was in white immediately outside Sam and the outside gates had started to work well by this stage of the meeting. Tungate took advantage of his outside gate to battle his way round Masters and annex the major points on offer. Two points for Sam where he would have preferred three. Kurtz had overcome his sluggish start to the meeting and registered another win, this time against Morris. That just about made it impossible for Morris to win and difficult for him to gain a series medal. Fricke had dropped two points in finishing behind Jack Holder and Sedgmen after an amazing swoop round the boards by Holder to head them both. With one ride each left it was

Tension was mounting with just one more scheduled ride remaining. Everyone had one eye on who would make the main final and achieve bonus points as it looked like the series would come down to who did better in the big one. Heat 19 pitted Sam against Morris in a rerun heat with Morris on his spare bike after an earlier turn one fall. Sam made the outside gate work for him and drove around Morris to take the major points on offer and finish his nights work on 12 which would be good enough for an automatic main final berth. Fricke had made a horrible start to drop a point to Ty Proctor but still managed to sneak direct into the main final, also with 12. You wondered how the nerves were going with a few of the riders. Kurtz had lowered his colours to a rampaging Tungate in a rereun heat where Kurtz had come off in turn one, and Sedgmen had done as he liked in his heat and was leading qualifier for the round on 14

Series points with it all on the line were

Now to the finalists for the round. The semi final was Morris (red), Holder (blue), Kurtz (white) and Tungate (yellow) All four riders had finished on11 points. The announcer was having fun trying to explain all the possibilities but there were too many to list in a short space of time. It was obvious though that Kurtz had to win the semi final or he would be under serious threat from Masters.

Now the drama went up a notch. Tungate had a blinder of a start out of yellow and sailed into the lead but entering turn three on lap two suffered from a bit of a brain fade and ended up in a heap on the floor. Groans from the Tungate fans and sighs of relief from the Kurtz fans could be heard. The rerun was one for the video package showing classic two rider battles. Kurtz got to the lead but Morris would not lie down and was gunning for the lead at every opportunity. Morris got level a couple of times but just couldn’t get his nose in front and Kurtz won by a bike length or so. It was wonderful speedway.

Just when you thought the drama couldn’t increase any more it did !! in the main final Kurtz (white) was adjudged to have touched the tapes and was dramatically excluded. More groans or smiles from the crowd depending on who they supported. Now it was glaringly simple, Masters had to finish first to win the championship, second for a run off, or third to fall tantalizingly short.

For the record local Mildura rider Justin Sedgmen was a popular and well deserved winner of the round with Max Fricke second. What a different story it might have been if Justin hadn’t come off at Undera !!

Footnote - Also spotted in the crowd were two recently arrived members of the Campbell clan, Graeme and Gordon, who, when asked what they thought of the 38 degree weather proudly announced, “we brought it with us, it’s always like this in Edinburgh”