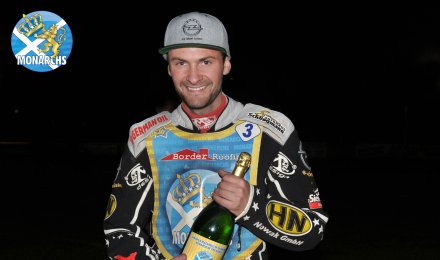 Kevin Wolbert was one of the key reasons why Edinburgh retained their Premier League title last season, and it was no surprise that he was quickly signed up for another season.

He put two points on his average and also endeared himself to the supporters when he returned from a late season injury to compete in the two-leg Championship Final against Glasgow, even though he wasn’t full fit.

He said “Now I am much better, the shoulder is better. When I came back it was a bit sore, but I didn’t want to miss another trophy. I already missed the German League final, but more important was the British League final because you are working many matches for that day. You don’t want to be in the hospital or at home.

“Away at Glasgow was a bit difficult but I had no problems at home.”

His enthusiasm is high and he has everything just about ready for the new season. “I still have a bit of work but I worked hard to get most of it ready before Christmas so if the weather is good I can have a practise. The engine is organised, there are bits coming in the next few weeks.

“I have some sponsors now, they helped me last year and now they are working with me again which makes it a bit easier. In some previous years I have had only a couple of sponsors, and in my year at Glasgow just one sponsor the whole season.

“It wasn’t because I didn’t like Glasgow that I did badly, they think that, but it was because I had so little sponsorship. I had hardly any time to clean my bikes, sometimes didn’t manage it at all, because I didn’t have the money to pay a mechanic.

“After that year I had almost decided to give up speedway and take up a normal job, unless I could get sponsors. I was the only German riding in the UK, some other riders were just riding six meetings at home and had more sponsors than me!

“I was going to get a job and just have some fun on the motocross bike, but then a couple of sponsors rang me. Now I’m happy again, I can go out training and riding motocross and get myself fit for speedway. Because I have sponsors I can enjoy my job.

“Also being back at Edinburgh makes me happy so all that together is good. I think the team can do well again, Fisher’s back and I think he will be like me, when I was away it was not the best years for me, but when I came back riding on that small track every Friday, that was good for me. It doesn’t work for everyone, for example Erik who needs more time to get used to it.

“If I have a bad meeting away, or overseas, you come back on the Friday and do well and you are happy and forgot what had happened two days before.

I will be riding at Stralsund again, we won the league as well, and so did my Danish team Munkebo who I hope to ride for again.

“The best thing for me would be to double up in the UK. If we can organise that it will be the best thing. I am fully ready, I will come to the UK with three bikes and if anyone wants to call me that will be great.”