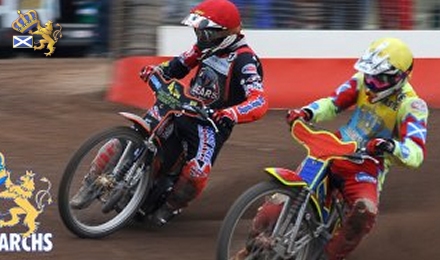 Monarchs had never won at Redcar, but our current team just love setting new records and could hardly have performed much better than they did in a 55-38 first leg victory over the Bears.

We certainly have at least one foot in the semi finals though of course we will still be working hard to ensure there are no slip-ups at Armadale on Friday.

Ryan Fisher was the star performer at the STMP, winning five heats in his classiest style. Matthew Wethers was involved in some fine races and totalled 12 including another heat 13 win, and Andrew Tully again dazzled with 11.

He had the audacity to beat Gary Havelock from the back in heat 6. A surprised ex-World Champ shook his hand at the end of the race having lost by a substantial margin.

There were numerous other highlights for another good Monarchs' travelling support to enjoy. Tomas Topinka gave a polished display as guest, winning heat 1 and joining Matthew in a heat 13 5-1, but overall the guest and rider replacement facilities didn't do any better than William and Thomas would have.

William will be back tomorrow while Andrew will be replaced by Sean Stoddart as we try to finish the job of qualifying for the semi-finals.