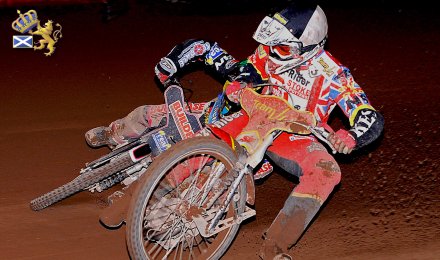 Derek being brought down in heat 8 Image Credit: Ron McNeill

The Scotwaste Monarchs travelled to Stoke on Saturday and pulled off an amazing 57-36 victory over a side rated the best fielded by the Loomer Road club for a while.

The fact is that Monarchs had targeted a win, they believed they could take the points and they made it happen, starting with two 5-1 advantages which demoralised the home side right away.

As ever the Monarchs were solid with everyone doing their bit, but a special mention has to go to Thomas Jonasson who scored a brilliant four-ride maximum.

He wanted to come out for heat 15 but Monarchs chose not to field him after an aggressive reaction from Ben Barker who was beaten by Thomas in heat 12.

Derek Sneddon was also very prominent, enjoying two tough battles with Barker and being unlucky in heat 8 when the Stoke man seemed to knock him off in desperation.

With Somerset losing at Berwick, Monarchs are now three points clear at the top of the table. The weekend has been good to us!