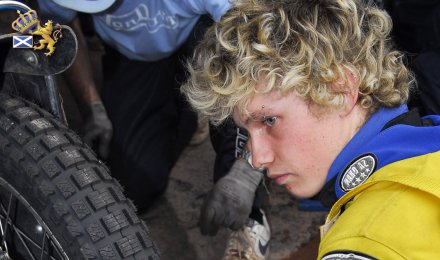 THIRD FOR AARON IN UNDER-21s

Aaron Summers was third in the final after being third qualifier in the 2009 Australian Under-21 Championship on his final appearance at this level. This means he will progress to the European rounds of the World Under-21.

Winner of the title was Darcy Ward, confirming his status as the most promising of the young Aussies, with Kozza Smith continuing his excellent down under form in second place.

In a competitive field Aaron confirmed that he is making progress and holding his own, though he has not really been able to match up to Ward and Smith in this Australian summer. He won two of his qualifying heats, dropping points to Ward, Smith and Josh Grajczonek, qualifying in third place for the final.

Top qualifier was Ward (14) with Smith on 13 and Summers 12. The semi-final was contested between Justin Sedgemen (7), Richard Sweetman (9), Mitchell Davey (9) and Josh Grajczonek (11). They finished in that order, a disappointing result for Grajczonek who had started strongly.

Mixed feelings there for Glasgow as Davey's performance exceeded expectations.

Smith led in the final but Ward proved his quality with an overtake. As usual the Aussies are well placed with another good batch of kids coming through.