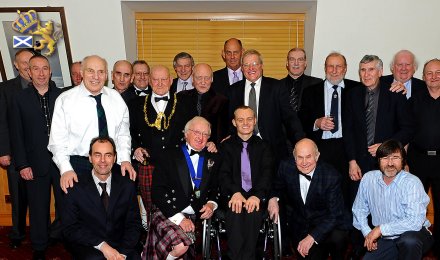 The annual Scottish dinner of the World Speedway Riders' Association was held at Deer Park Country Club on Saturday and was enjoyed by an audience which included several former Monarchs.

The guests of honour this year were Tommy Hughson (Monarchs' mascot 60 years ago and later team manager) plus Scottish Speedway legend Bert Harkins, who is also the current WSRA president.

There were other long distance travellers, notably Bengt Jansson over from Sweden, plus Rob Hollingworth and Terry Stone from down south.

This year's choice of background music with the post-meal and speeches time given over to informal chatting seemed to go down well with the gathering.

The full line-up in the photo: