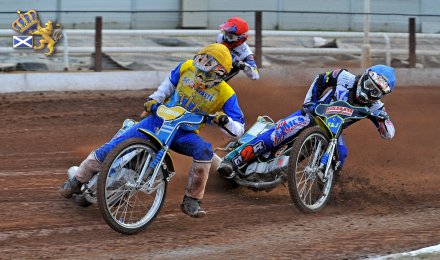 The Scotwaste Monarchs led by 6 points from heat 6 to heat 12, but let it slip away over the last three races and lost 46-44.

It's a disappointing result at a track where Berwick and Sheffield have landed big wins. The one point we gained has taken us to the top of the northern section but we have missed a chance to really open up a gap.

We had a fair bit of bad luck ? Ryan Fisher seized his small track engine at the tapes in heat 1 and never really recovered, and Aaron Summers also seized an engine.

However we failed to show the required resolve over the last three races and in that respect we deserved to lose.

We lost a 5-1 in heat 13 after Fisher touched the tapes, then a 4-2 in heat 14 won by Derek Sneddon. Against Larsen and King in the final heat hopes were not all that high, and we could only manage a second by Mathew Wethers.

Our best performers were Summers with three wins, and captain Wethers who worked hard and also loaned out his bike to both Ryan and Aaron. Guest Richard Hall tried hard without looking comfortable.

We now look to the home and away matches with redcar and Glasgow, to gain as many points as we can and hope still to qualify ? chances should still be good, especially if we can track something like a full team.