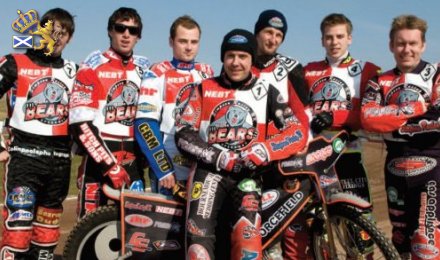 The Scotwaste Monarchs race one of their major qualification rivals this week, Redcar Bears being the opposition on Thursday at the South Tees Motor Park and on Friday at the Scotwaste Arena, Armadale.

Monarchs top the section at the moment, but the Bears appear to have the more favourable remaining fixtures. However the matches between the two could also have a major bearing and Monarchs hope at last to be at full strength, after a weekend on which the absence of Jonasson and Tully cost them points.

TEAMS FOR THE PREMIER TROPHY MATCH AT ARMADALE ON FRIDAY 1st MAY (start time 7.30, doors open 6.30) are:

INJURIES: At the time of writing it looks as though both Thomas H Jonasson and Andrew Tully will be fit to ride at Redcar on Thursday.

This was Tully's view on Sunday and he will continue to work on his injuries under John Porteous, physio of Motherwell FC who has been advising him.

Jonasson has completed the week's rest he was ordered to take and should be in the UK by Wednesday.

He will not be riding on Friday though as he has to be en route to a Swedish Under-21 semi-final at Eskilstuna. Rider replacement will operate for the home match with Redcar.

TROPHY PROGRESS: Last weekend Monarchs gained three points at home and single away points at each of Workington and Newcastle. A total of 16 was enough to take them to the top of the table prior to this week's fixtures, though they had certainly been looking to win at Newcastle. They will hope to at least take the full 3 points from their two remaining home matches.

Monarchs have four matches left. Berwick and Workington are one point behind on 15 points with 3 and 2 matches left respectively.

Redcar are well placed on 14 and they have 4 matches left (2 home and 2 away), including a visit to Newcastle which may be a good chance for them to steal a march on the others.

Glasgow have 13 points with four matches left and could still feature if they can pick up some away points. It would seem that the new scoring system has increased interest.

MEETING SPONSOR: Sponsors of Friday's match are the Spylaw Tavern of Edinburgh, who have sponsored on the first Friday in May for three seasons now.

BEARS FIND A GOOD MIX: No team in the Premier League has as experienced a trio as Gary Havelock, Robbie Kessler and Carl Stonehewer at the top of their team. All three are riding well with plenty of life left in them.

It's not all about old timers though because Ty Proctor is just 22 and one of Australia's best prospects, while former UK Under-21 champ Ben Wilson is having his first year with the Bears.

Their prospects may depend a fair bit on whether Wilson can improve his rather poor record at Armadale. The other riders mentioned have no such Armadale problems.

Reserves Bugeja and Compton might prove to be a weak part of the Bears' team but it will certainly be a tough match for Monarchs. Redcar have already won at Sheffield and looked for much of their match at Workington as though they were going to win there, even with a weakened team.

LAST MEETING: Monarchs took a hard-fought 53-43 win over Berwick in spite of the absence of Jonasson and Tully. Derek Sneddon guested for his old team. Top scorer was Ryan Fisher (13).

NEXT MEETING: Monarchs race Sheffield in the first leg of the first round of the Knockout Cup at Armadale on Friday 8th May. The Sheffield leg had been scheduled for the previous night but this has been postponed to Thursday 28th May due to stadium refurbishments at Owlerton.