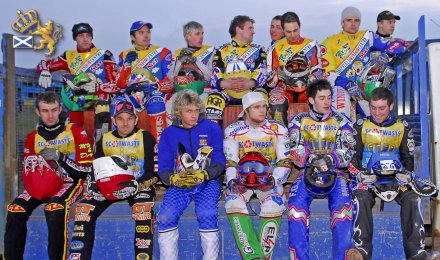 The Scotwaste Monarchs won all the national trophies on offer last season ? except for the Knockout Cup. This year's KO Cup starts this week with a tie against Sheffield.

The first leg is at Armadale on Friday but due to stadium refurbishments at Owlerton Stadium Sheffield, the second leg will not be held until Thursday 28th May. Friday's match obviously will be hotly contested as two full strength sides try to put themselves in a good position for the second leg. The aggregate winners will go on to meet Workington who ironically were the team who knocked Monarchs out last season.

TEAMS FOR THE KNOCKOUT CUP FIRST ROUND FIRST LEG MATCH AT ARMADALE ON FRIDAY 8th MAY (start time 7.30, doors open 6.30) are:

KO CUP: The ties in the first round of the KO Cup are:

The cup holders are the Somerset Rebels.

THOMAS H JONASSON: Thomas suffered the very sad loss of his father last week, but he has announced his intention to turn out for his Swedish club Vetlanda this Tuesday, and for Monarchs on Friday.

The club obviously would have respected any decision Thomas made.

Monarchs' promoter John Campbell says ?I have made all Thomas's bookings to come over and he sounds very positive?.

PREMIER TROPHY: This week's match is a break from the Premier Trophy in which Monarchs lead the northern section table.

When the competition resumes next week a home win against Glasgow if they can get it would ensure that the Scotwaste Monarchs qualify for the semis, but also in contention are Berwick, Glasgow and (less likely) Workington and Sheffield.

SHEFFIELD SHUFFLE: The Yorkshire side have already been at Armadale this season, going down by 14 points on 3rd April in the Premier Trophy. Their best performer by far was reserve Josh Auty with 16 points.

Since then Sheffield's form has not been up to expectations, and they have lost twice at home, previously a very rare occurrence.

They have reacted this week by shuffling their septet, moving Parsons to partner no. 1 Ricky Ashworth and forming a completely new middle pairing of Richard Hall and Paul Cooper.

Will it make a difference? Time will tell but Monarchs will probably still view Auty as the biggest threat along with Ashworth. Former British Champion Eric Boocock is their team manager and he has a noted reputation as a motivator.

Although Sheffield were well beaten in the Sky TV match on Tuesday at Scunthorpe, they contributed in full to one of the best ever televised meetings.

LAST MEETING: Monarchs beat Redcar 57-35 at Armadale last Friday, having defeated the Bears on their own track the night before. Ryan Fisher (13) was top scorer.

NEXT MEETING: Monarchs complete their home Premier Trophy qualifying programme on Friday 15th in the northern section by taking on Glasgow who are themselves still in contention after a win at Sheffield. Two days later Monarchs travel through to Ashfield for the return.