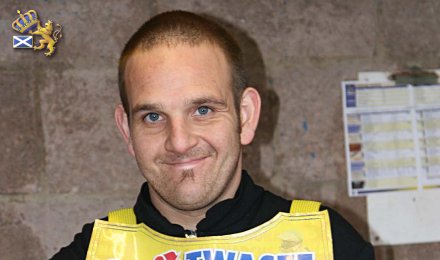 RYAN HOPES TO BE FIT FOR BIG WEEKEND

The Scotwaste Monarchs complete their programme of Premier Trophy qualifying matches this weekend with home and away fixtures against Glasgow ? and both teams are still strong contenders to qualify.

The balance of the sides may be upset by the absence of Aaron Summers and Peter Juul in FIM individual competitions overseas, but at least it seems there is a good chance of Ryan Fisher racing in spite of his frightening pileup while riding for Swindon in the Sky TV match on Monday.

PT NORTHERN SECTION: With just a handful of northern section matches to go, the target is reasonably clear for the Scotwaste Monarchs.

If they were to beat Glasgow by more than six points on Friday, they will take 3 match points and move on to 25. Superior points difference then would make it a virtual certainty that Monarchs would win the section (and avoid powerhouse King's Lynn in the semi-final!)

A win by less than 6 would take them to 24 and ensure qualification, but allow the possibility that Berwick could win the section by taking the maximum 7 match points from matches against Sheffield.

A draw or defeat would pass the initiative to Berwick and Glasgow.

RYAN FISHER: After crashing heavily on Monday many feared the worst for Ryan.

He came down awkwardly in heat 8 of Eastbourne v Swindon, and was clattered by the bike of following rider Chris Schramm.

He tried to go out for another ride but had to withdraw. But he is one of the sport's most resilient characters.

Today he said ?I am getting better and I think I will be OK for Friday, as long as progress continues in the next couple of days.

?I have a knot on my inside leg the size of a softball, if you know what that is!?

MEETING SPONSOR: Joint sponsors of the Scottish derby on Friday are James Banks Joinery of West Calder, and Scotmat Carpets of Broxburn.

TOP FOUR TIGERS IN PLACE: Glasgow have been on excellent form recently, but they have had to make several changes to their lineup for the weekend matches.

The good news for the Tigers is that the four riders who have been doing the vast majority of their scoring are all still there!

Shane Parker is going better than ever, as is James Grieves, and for a top two with a combined age of over 70 they are in exceptionally lively form and making things look easy.

Josh Grajczonek is living up to expectations as a top prospect ? and his compatriot Mitchell Davey is certainly exceeding expectations of his scoring so far!

Details of the changes to the teams follow. Few would argue that these swing the balance of strength in Glasgow's direction.

ABSENTEES: Aaron Summers is away for the World Under-21 round at Mseno on Saturday, and Peter Juul rides in the European Under-19 Championship. Rider replacement operates for both, and Juul is the higher up in averages allowing James Grieves a ride for Glasgow!

Summers' rides will be shared between Tully and the two reserves, which on recent Armadale form suggests a weakening of the home side.

Also Glasgow will use guest rider Tom P Madsen (Stoke) to replace the injured Ross Brady, and Australian National League rider Scott James in place of Lee Smart who is riding in an NL match.

LAST MEETING: Monarchs easily beat Sheffield 59-31 in the first leg of their Knockout Cup match at Armadale last Friday. The match was affected by rain and top scorer was Ryan Fisher (15).

NEXT MEETING: The Premier League begins and Monarchs will take on Scunthorpe Scorpions at Armadale on Friday 22nd May.