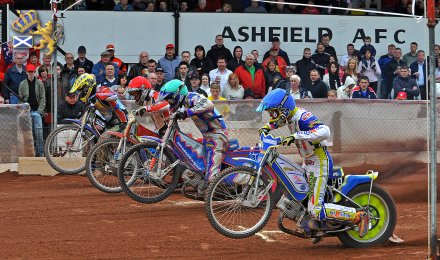 WE'RE IN THE SEMIS

The Scotwaste Monarchs gained a somewhat unexpected but very much deserved away win at Glasgow today, thereby qualifying for the Premier Trophy semis, almost certainly as section winners.

The various absentees in the two sides seemed to swing the balance towards Glasgow, with a strong rider replacement for Juul. They have been going well at home with Parker and Grieves dominant.

However we gave a very determined display and kept all the other Tigers pretty quiet, making heats 8, 12 and 14 count, with Michal Rajkowski an absolute standout as he has been in all of our best away displays. The Pole was unlucky to stop in heat 14 when riding alongside Andrew Tully, well clear of the home pair.

Ryan Fisher beat Parker in heat 1, and featured in the race of the night with Grieves in heat 11, losing a thrilling passing battle. He gained a measure of reserve by splitting the Tigers in heat 13 for what proved to be a crucial second place.

In spite of Rajkowski's engine failure we had a 6-point lead going in to heat 15 and could afford to lose a 1-5.

There would need to be a big turnaround in race points, as well as home and away wins for Berwick against Sheffield, for us to be anything other than section winners.