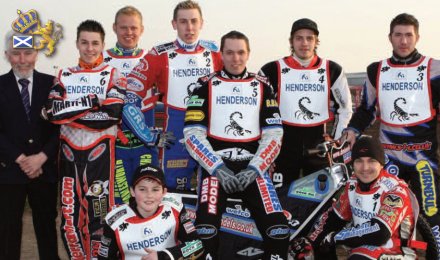 To most supporters the Premier League is the real business of the Speedway season, and reigning champions the Scotwaste Monarchs open their defence by hosting the Scunthorpe Scorpions at Armadale this Friday.

The return is on Monday afternoon. The Scorpions are in their second Premier League season and showed their determination to improve on last year's tenth-place finish by signing Elite League star David Howe to spearhead their team alongside former Monarchs' favourite Magnus Karlsson.

PT NORTHERN SECTION: Even though the home Premier Trophy match against Glasgow was rained off last Friday, Monarchs nevertheless brilliantly pulled off an away win at Glasgow on Sunday to ensure that they qualify for the Premier Trophy semi-finals.

With 25 points they are almost certain to win the section. Berwick still have a mathematical chance of grabbing top spot but only some incredible results would bring that about.

Glasgow, with new Swedish signing Robin Tornquist, would probably need to win at Armadale next Friday (29th) in the rearranged fixture to have a chance of qualifying.

RIDER FITNESS: Full marks especially for their efforts on Sunday to both Ryan Fisher and Andrew Tully, two guys who are not really fit but will race whenever possible.

Alan Bridgett says ?Ryan showed me his injured leg and I have never seen a bruise like it, from his knee up to his groin and round his leg. I don't know how he is walking never mind riding.?

Tully also is still suffering after his recent shoulder injury and was in great pain after crashing at Glasgow, but rode on and won the vital heat 14.

AWAY DATES: Monarchs race at the Eddie Wright Stadium, Scunthorpe on Monday afternoon (start time 3pm) in the return Premier League fixture. Then on Thursday 28th Monarchs are at Sheffield in the second leg of the Knockout Cup tie in which they hold a 28-point advantage from the 1st leg.

MEETING SPONSOR: Sponsoring Friday's match against Scunthorpe are Keyline Broxburn who have backed so many Monarchs' matches including the annual classic Scottish Open.

IMPROVING SCORPIONS: Scunthorpe are one of the most ambitious clubs in Speedway, and are certainly looking to finish higher in the Premier League than their tenth of their debut season in 2008.

That's why they signed David Howe, Elite League star with Wolverhampton last season, former UK no. 2 of 2007 and Scottish Open Champion of 2004. David is an Armadale specialist and you can say the same for Magnus Karlsson, a member of the league winning Monarchs' team of 2003 and still a big favourite with Monarchs' fans.

Other danger men will be spectacular Carl Wilkinson plus Swede Viktor Bergstrom, a handy performer who has not ridden at Armadale before.

Scunthorpe are likely to be Monarchs' opponents in the Premier Trophy semi-finals later in the season, if results go according to expectations.

THOMAS: Thomas H Jonasson will not be riding on Friday as he will be on his way to the Nordic Final of the World Under-21 Championship. He will however be able to get back in time for the match at Scunthorpe on Monday.

LAST MEETING: The home Premier Trophy match against Glasgow was rained off at Armadale last Friday and will now be restaged on Friday 29th May, with the scheduled visit of Stoke postponed till later.