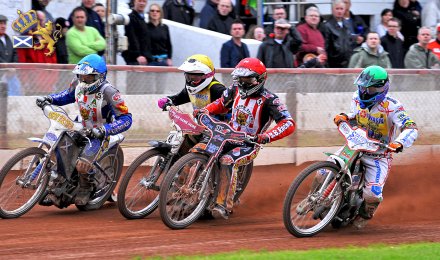 TIGERS BACK TO COMPLETE THE PT

The fourth ?Scottish Derby? of the season takes place at Armadale on Friday as Glasgow Tigers return for the restaging of the Premier Trophy match rained off a fortnight ago.

Following his crash last Sunday, in which a broken leg was initially suspected but happily later refuted, James Grieves will not make it for the match and will be replaced by Swindon's Travis McGowan. It will also be an Armadale debut for Tigers' new Swede Robin Tornquist. Monarchs will use rider replacement for Thomas H Jonasson in a new team lineup.

PT NORTHERN SECTION: Whatever happens on Friday, Edinburgh have won the northern qualifying section of the Premier Trophy and will face the southern section runners up in the semi-final.

However Glasgow could still qualify as runners-up if they managed to win at Armadale. Even a draw might do it if other results go their way.

THOMAS'S WEEK: Thomas H Jonasson is having one of his busiest weeks ? and that is saying something!

On Sunday he was in Norway, brilliantly winning the Nordic Under-21 Championship with a 15-point maximum. He flew to Gatwick that night and was picked up and taken to Scunthorpe for Monarchs' match there.

On Tuesday he was in Sweden to ride for Elit Vetlanda at Lejonen, before returning to the UK to ride at Sheffield on Thursday. Then he heads back to Sweden to fill a reserve berth in the Swedish Grand Prix in Gothenburg.

Next week it all starts again for THJ!

KNOCKOUT CUP: Monarchs travel to Sheffield on Thursday in the second leg of the first round Knockout Cup match. They lead by 28 points from the first leg. Interestingly, Sheffield beat Berwick by 29 at home last Thursday!

NEXT AWAY: In a busy period. The Scotwaste Monarchs have another away Premier League match next Wednesday (3rd June) when they travel to Somerset.

MEETING SPONSOR: Friday's Scottish derby will be sponsored by James Banks Joinery and Scotmat Carpets, who were due to back the original staging and happily are able to return.

UNFAMILIAR TIGERS: Only three of the riders fielded by Glasgow on their previous Armadale visit in March will be riding on Friday ? but Monarchs will not be taking them lightly.

The three still in place are all Aussies ? Shane Parker, Josh Grajczonek and Mitchell Davey.

The inclusion of Travis McGowan as guest for James Grieves should not weaken them ? McGowan scored a maximum at the track in 2006 (guesting for Reading) and was runner-up in last year's Scottish Open.

New signing Robin Tornquist from Sweden will be making his Armadale debut and though he didn't have a great first match for Tigers last Sunday, he does seem to have a decent pedigree.

Rider replacement operates for Ross Brady and the no. 7 will be a National League replacement for their usual rider Lee Smart who is competing for his NL club Weymouth.

NEW LINEUP: The first revised Green Sheet averages apply from Friday and this means that Michal Rajkowski steps up from reserve with Aaron Summers replacing him. Monarchs have juggled their team to put Rajkowski with Andrew Tully in the middle pair, and captain Matthew Wethers with Ryan Fisher. Thomas H Jonasson (or rider replacement) will be at 5 riding mainly with the reserves.

LAST MEETING: Monarchs opened their Premier League campaign with a hard-fought home win by 51-40 against Scunthorpe. Top scorer with a dozen was Andrew Tully.

NEXT MEETING: Next Armadale visitors on Friday 5th June will be Rye House Rockets ? who only lost by 1 point in the corresponding match last year during Monarchs' Championship season.