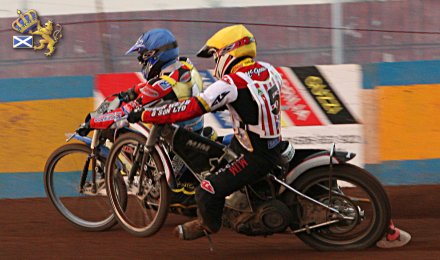 PT QUALIFIERS END WITH A WIN

It was an eventful night at Armadale with Michal Rajkowski earning the biggest cheers for winning the last three heats as we beat Glasgow Tigers 53-40.

It was the sunniest and warmest night of the season, drawing a good crowd, and Monarchs held the upper hand throughout though they did seem intent on gifting points to the opposition.

Two falls by Andrew Tully and one by Ryan Fisher helped Glasgow's cause as the track proved quite tricky for much of the night.

Fisher did get proceedings off to a good start with a win over Shane Parker, and he also pulled off an excellent pass on Parker in heat 13 in which he just failed to catch Travis McGowan round the final turn.

But it was steady reserve Summers and the sensational Rajkowski who really kept the team on track. Aaron Summers won three of his first four heats, and the Raj took the Monarch of the match award with his wins in heats 13, 14 and 15.

That of course meant he beat Parker and McGowan twice in great style. These were the top two Tigers though Grajczonek, Davey and Tornqvist also had their moments.

Edinburgh finished top of the section with 28 points and will now face Scunthorpe in the Premier Trophy semi-final. The other semi will be King's Lynn v Berwick or Workington ? the Bandits need to beat Sheffield by 10 points or more when they meet.