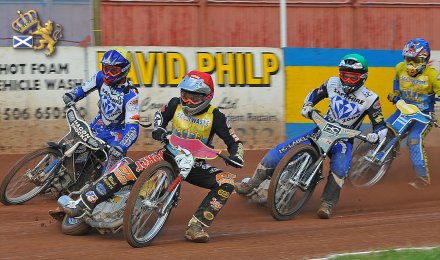 Newcastle gave a much improved Armadale performance and were only three points behind after nine heats, but the Fisher-inspired Monarchs pulled away to take maximum points again.

The American was at his best for the home team with an untroubled six-ride paid maximum. Generally he gated ahead but he did have to work hard to back up Matthew Wethers in heat 13 after Kenni Larsen slipped inside him.

Fisher coolly regained position and blocked out the Dane gfor what was Monarchs' third 5-1 in four heats.

This put them in a strong position after a heat 9 Newcastle 8-1 had cut the gap to just 3 points.

Tully, Wethers and Summers were also in fine form with Tully providing most of the overtaking thrills.

Michal Rajkowski had three poor rides but finally won heat 12, while Sean Stoddart did score in two of his three heats.

Newcastle provided decent opposition after their last two hammerings at Armadale, with Sneddon and Larsen in double figures.