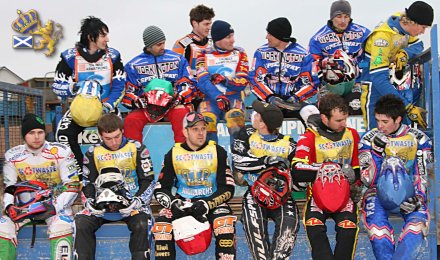 PERHAPS THE MATCH OF THE SEASON

The Scotwaste Monarchs take on Workington Comets in the Knockout Cup quarter final at Armadale on Friday with the return at Derwent Park the next day.

The teams are both semi-finalists in the Premier Trophy and seem to be very well matched. The prospect is that we will see a terrific tie which will very likely not be decided until the thirtieth heat on Saturday evening. Monarchs will be using rider replacement for Thomas H Jonasson while Comets list their full septet, though they have not finally confirmed that Charles Wright and John Branney have recovered from their recent injuries.

If the Premier Trophy matches between the sides were any guide, Monarchs would stroll through.

They beat the Comets 60-34 at Armadale and only went down 42-48 in Cumbria. Add in the fact that Comets gained points through TRs, Edinburgh did not, and TRs don't apply in the Knockout Cup ? well it looks even easier!

This is of course irrelevant and Workington approach the tie as Premier League leaders, with six away points gained in their first three matches, plus four unblemished home matches with maximum points in the bag.

Monarchs' search for a seventh rider in their side has yet to bear fruit in spite of several lines of enquiry being followed.

The rider replacement facility will continue as necessary until the second weekend in July, by which time a decision must be made on bringing the side back to full strength.

The biggest story to come out of Workington this year has not concerned their all-star heat leader trio, but their two least experienced riders Richard Lawson and Craig Cook.

They have supplied exactly the kind of backup their team needed even though they are in their first seasons at this level, and have prompted Comets' owner Keith Denham to say that he will be looking for more talent amongst the Moto-X riders.

A group of local supporters under the title of Armadillies are the sponsors of Friday's Knockout Cup tie.

COMETS COMING GOOD: League leaders Workington are finding things falling into place for them, barring one or two injuries.

Their heat leader trio of Kevin Doolan, Andre Compton and Adrian Rymel is exceptionally strong and the allegation that the team would be too top-heavy has proved to be unfounded.

At the start of the season Charles wright and John Branney were expected to give the most backup, but in fact newcomer Richard Lawson has turned out to be one of the sensations of the season.

He scored points right from the start of his debut year in the PL and has several double figure scores to his credit. Of course he could have no more shrewd advisor than former Glasgow no. 1 Steve, his dad.

Recently he has been joined in the side by Craig Cook who has also been scoring very well ? indeed he made his debut in the Premier Trophy at Armadale.

With so many interesting and exciting riders on both sides we should be in for two days of great speedway.

LAST MEETING: Monarchs beat Newcastle 55-40 in a league match which was closer than the score suggests. Ryan Fisher rode unbeaten through six rides in his best meeting of the season so far.

NEXT MEETING: There is now a two-week break because of the Premier League Pairs at Somerset on 26th June (Monarchs' representatives being Ryan Fisher and Andrew Tully) and of course the Cardiff Grand Prix the following day. The next meeting at Armadale will be on Friday 3rd July, the visit of Newport Wasps in the Premier League.