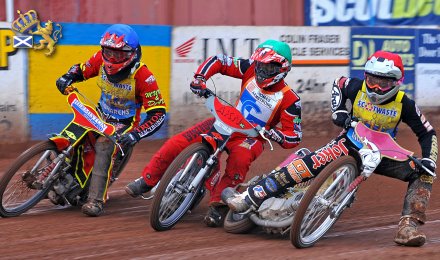 22 POINT LEAD FROM THE FIRST LEG

The Scotwaste Monarchs took a 22-point advantage from the first leg of the Knockout Cup quarter final against Workington, but they know they will have to work hard and ride well to come out on top on aggregate on Saturday night.

It was an efficient display by Monarchs who gradually built up a lead, after going ten points clear after just three races.

Ryan Fisher won four heats in his 15-point total, and won the final race to prevent the Comets making any late inroads into Monarchs' lead.

Wethers, Tully and Summers were also in double figures, and all six Monarchs won heats. Matthew Wethers pulled off the move of the night to catch Andre Compton on the final bend of heat 7, and Andrew Tully's pass on Craig Cook in heat 14 was another impressive effort.

No-one is thinking it will be easy at Derwent Park though.