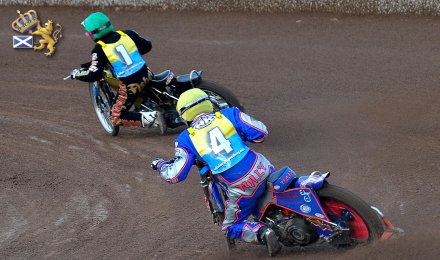 NON-QUALIFIERS BUT A GOOD TRY IN PAIRS

Ryan and Andy did not qualify for the semi-finals of the PL Pairs but they were entitled to hold their heads high after they had performed with spirit and skill.

Ryan took two wins and Andrew made a sensational start, with a win and a paid win in his first two outings.

However both also had a bad ride ? Ryan was at the back in our first heat before discarding the bike he used and switching, while Andrew's third ride was a last place against the weakened Glasgow pair (Shane Parker taken to Hospital after a heat two crash in which he took a bash in the back).

This meant that we knew we needed four points from a hard final ride against Workington ? a win or a second and third would have done it.

Andrew made a good start but as he admitted afterwards he did not switch to the outside quickly enough and was caught by Rymel as we lost the heat 7-2.

That left Birmingham needing six against Glasgow, and they duly took seven to put us out. Not only that, they went on to win the event even though the had appeared the weakest pair in the semis!

We had opened up with a 4-5 against Redcar in heat 4, a great win for Andrew ahead of Proctor. Ryan was pressing Havelock hard in the early stages but made no headway.

Our next outing was heat 10 and with a perfect combination ride, Fisher wide and Tully inside, we kept Jason Lyons back in third to score a 7-2 over the Brummies. At this stage Piszcz was pointless and looked nothing like an eventual winner!

Our next outing was against grieves and replacement Tom Brown of Glasgow, an opportunity to virtually ensure a semi-final place. Grieves though had his best ride of the evening and led most of the way, till caught by Fisher on the final lap. However Tully made his only poor start and could not peg back Tom Brown.

Our riders worked well together, encouraged each other and were both frustrated as they knew that they should really have made it through. After that, anything could have happened as we were to find out!