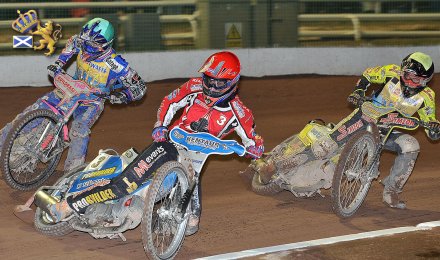 The Scotwaste Monarchs race the second leg matches in two major events this week, with Belle Vue Aces returning to Armadale on Friday for the second leg of the Elite Promotion Playoff.

Before then Monarchs travel to King's Lynn holding a 7-point advantage in the Knockout Cup Final. Unfortunately having had a 7-man team just last week for the successful Premier Playoff Final, Monarchs are now down to five men of their own for the Lynn trip at least, with key men Michal Rajkowski and Kevin Wolbert out of action.

SCOTTISH OPEN OFF: The Homecoming Scottish Open, originally planned for Friday, will now be staged as the opening meeting of the 2010 season, possibly on 19th March.

Supporters with readmission tickets that they will not be using should send them (by 7th November please) for refunds with name and address to: Speedway Office, Armadale Stadium, 2 Bathgate Road EH48 2PD.

The club would like to pass their grateful thanks to a number of supporters who have stated they will ?bin' their readmission tickets and will pay again on Friday, in view of the financial blows of the bad weather the club have suffered last weekend and earlier.

John Campbell said ?This is a great gesture by these fans and they can be sure it will encourage us to press on and build another great team for the 2010 season.?

By now sponsors of the Scottish Open should have been contacted to be informed of their options.

THE PROMOTION / RELEGATION MATCH: Monarchs face a whopping 27-point deficit against Belle Vue, their Elite League opponents, and cannot be sure that Kevin Wolbert will be fit.

It's a daunting task but given a decent break from the weather, it is sure to be an exciting occasion.

THE KNOCKOUT CUP: This will be decided on Wednesday. Monarchs won the first leg last Friday by 48-41, the closest of the three legs of national finals between the teams held at Armadale this season.

MATCH SPONSOR: Sponsors at Armadale once again on Friday will be our old friends from Keyline Broxburn whose support is greatly valued by the club.

ACES AN ATTRACTION: Belle Vue may be at the foot of the Elite League table but they will still be the strongest team seen at Armadale this season.

They have a World Cup winner from this season (Krzysztof Kasprzak), the World Under-21 no. 3 (Patrick Hougaard), the 2007 Premier League Riders' Champion (James Wright) and the 2008 Premier top average rider (Ulrich Ostergaard ?at no. 7!)

All of these men get an extra ride for Jason Crump, the injured World Champ, and two good Premier League guests complete their side.

Clearly it will not be easy ? but it should be fun!

Monarchs lost 32-59 at Belle Vue in the first leg of the Elite Promotion match, and unfortunately Kevin Wolbert injured his hand when falling in the last heat. He may have a broken finger.

NEXT MEETING: After Friday, that's it for 2009 and team building for 2010 will continue.