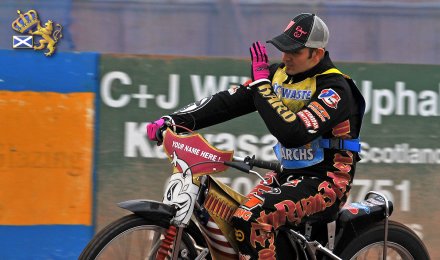 FISHER BACK FOR HIS THIRD YEAR

The Scotwaste Monarchs are delighted to announce the return of Californian flyer Ryan Fisher for his third season with the team.

The American made it clear at the end of the season that his preferred option was to stay at Edinburgh, and his wish has been granted.

Club chairman Alex Harkess said ?Obviously Ryan has become a big part of our team in what have been two of our most successful seasons, and we could not be more pleased that he is back.

?Ryan is a Coventry rider but as always the Coventry organisation has been great to deal with. Colin Pratt confirmed at the weekend that they were willing to allow Ryan to return to us, and even though there had been other Premier teams interested, there was never any question that he would go anywhere else.?

Fisher did well doubling up with Swindon last season but will not be able to do that in 2010 as his PL average is over 8. He did consider going full time in the Elite League but finally decided to carry on his happy association with the Monarchs.

He rode at no. 1 throughout last season and gave the team a great lead, totalling 657 points in all matches, including winning heat 1 on no less than 42 occasions!

There are just two Monarchs confirmed for 2010 so far, but what a good twosome it is!