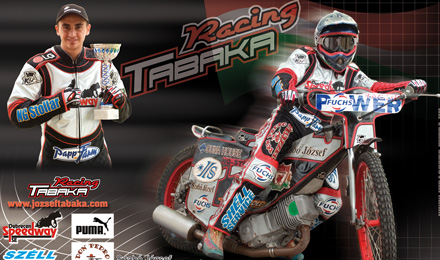 The Scotwaste Monarchs have signed their first ever Hungarian rider, 20 year old Jozsef Tabaka, who was reserve for last year's World Under-21 Championship.

He is not a fluent English speaker yet, but he did say to Monarchs' promoter John Campbell ?Thanks for the chance! I'm happy that we will work together and I would like it that the team be successful.?

He scored 3 points from the 2 rides he had in the World Under-21 Final, defeating Simon Gustafsson and Ludvig Lindgren. He has never ridden in the UK but is Hungarian Under-21 champion and is looked on as the leading youngster in a country whose representatives have been getting a bit long in the tooth.

He will be making his UK debut soon, racing in the holiday meetings at Scunthorpe and Newport.

In Poland he rides for the Hungarian representatives Miskolc in League 2. He was top scorer in Hungary's World Team Cup qualifying bid, and had a good run in the European Championship, reaching the final and finishing down the field in that, though level with Macs Gregoric and Mads Korneliussen.

His Continental results are pretty impressive though as with all overseas riders, his success will depend on the transition to UK tracks. We welcome him and wish him well.

This means we are not going to be seeing the highly popular Michal Rajkowski in the side next season. Michal now knows this and has said he hopes he will ride for us again one day.

The team will be completed if the anticipated return of Max Dilger is confirmed.