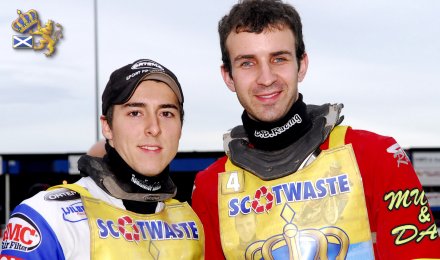 Matthew will welcome Max back for next season Image Credit: Ron MacNeill

German rider Max Dilger will return to the Scotwaste Monarchs' team for the 2010 season, and the team is complete for what is expected to be the final Armadale season.

Max rode 12 matches last season and did not do as well as his continental record suggested he would, but on a 3-point average he was an obvious choice as a rider who should be able to increase his average in the new season.

John Campbell said ?The way we had put our team together, we were committed to a 3-pointer and it had become slightly concerning that Max hadn't returned his contract after a few days.

?Whatever the delay was, I was relieved to find a signed contract coming in just as I was leaving the office yesterday.?

Dilger is a former German Under-21 Champion and was highly placed in both senior and under-21 competitions in his home country last year. He was also a key member of the Landshut team which won the German League championship in 2009.

He had a highest score of 6 for Monarchs last year, in the Sky TV match at Redcar, but will be looking to improve on that next summer.