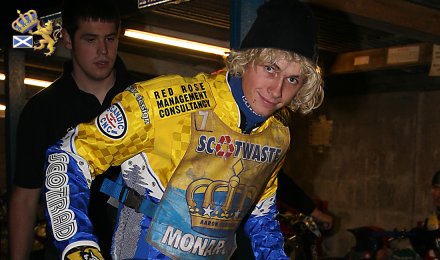 Aaron on loan to Brummies

After two years in the Monarchs' team, Aaron Summers will go on loan to Birmingham for the 2010 season.

The Brummies have a new-look side which is heavily based on Australian riders, seeing Aaron line up alongside Jason Lyons, Steve Johnston, Justin Sedgemen and Richard Sweetman.

Last season at Birmingham Aaron scored 13+1, losing his saddle in his one scoreless ride, so there is no doubt he rides well there.

He raised his average by a point last season and clearly has the potential to go further. He will be 22 just before the start of the new season and remains part of our future plans. We wish Aaron well for next season.