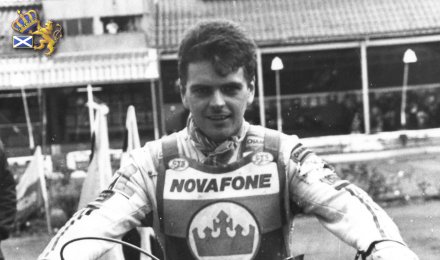 Rob Woffinden, father of GP star Tai and a Monarch back in 1988, has passed away after his long illness.

It is no surprise as it has been known for a year or so that Rob's illness was likely to be terminal, but his death will be greatly mourned nevertheless. No-one can fail to have admired the way he has fought on to leave Tai in the best position to continue his career.

Sheffield boss Neil Machin, a close friend, said ?Rob is a hero, he has been an inspiration to so many friends and family both here in the UK and his other home in Australia.

?Whilst this is devastating news Rob has worked so hard to prepare everyone and encourage them to plan ahead which is testimony to the brave character of the man, he will be sorely missed.?

Amongst many clubs Rob rode for his home town Scunthorpe, Sheffield and Berwick. He joined Monarchs for the end of the 1988 season and scored paid 85 points in 16 matches.

Although he could not attend our Jubilee celebrations in 2008 he did send a message to be read out recalling his short spell as a Monarch. He has been with Tai when his son rode at Armadale, and his absence will be felt throughout speedway.