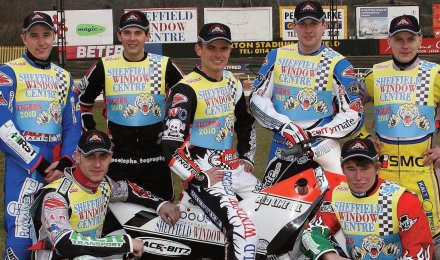 The Scotwaste Monarchs have not ? so far ? distinguished themselves in the Premier Trophy, but this week's fare is the first two matches in the Premier League with a good start highly desirable.

Monarchs go to Redcar on Thursday and then host Sheffield Tigers at Armadale on Friday. Max Dilger will still be missing with his dislocated shoulder ? replacements are Byron Bekker (Thursday) and Cal McDade (Friday).

PREMIER TROPHY: Newcastle have won the Premier Trophy northern section and will race in the semi-finals ? the 5 points they took from Berwick last weekend were sufficient and they have certainly been the best team in the section.

Second place, and with it a chance to qualify (as best placed second team) is still possible for Monarchs should they win their two outstanding away matches at Glasgow and Newcastle, both postponed in the last fortnight.

They would need to win both and probably take the maximum four points from at least one of the matches.

KEVIN RIDES ON: No-one who saw Kevin Wolbert's heat 3 crash last Friday will be surprised that there have been repercussions.

It was a heavy fall as he misjudged a passing move.

He was in pain over the weekend and went to Hospital on Monday for a checkup on some swelling in the lower back.

Thankfully there has been no serious damage although Kevin has been told it will be two to three weeks before the swelling goes down. He will be riding in the two matches this week.

MAX OUT: Not such good news from his fellow countryman Max Dilger whose shoulder dislocation is a more awkward injury, one which could recur.

He may attempt to ride in Germany over the weekend.

MATCH SPONSOR: Spylaw Tavern of Colinton are the match sponsors at Armadale on Friday, a regular annual date for Ross Sillars and party. The next day is his son Callum's birthday.

UNPREDICTABLE TIGERS: Some have tipped Sheffield to do well this season ? and some have been less complimentary! Who will be proved correct?

The Premier Trophy hasn't done much to settle the arguments. Birmingham won at Sheffield, who used to be nigh invincible at home ? but then the Brummies have won all their away matches in the Trophy very easily.

Sheffield have won their other home matches and also won away at Redcar, so they can be reasonably happy with their form.

They don't have a great Armadale record, but Monarchs too have been shaky this season with two home defeats already ? very unusual!

Certainly youngster Josh Auty is one of the real Armadale specialists with great passing ability, and riders like Franc, Ashworth (current Premier League Riders' Champion) and Hall have all had their moments at the track in the past.

LAST MEETING: Last Friday Monarchs suffered a very disappointing 43-52 home loss to Glasgow, certainly Glasgow's most emphatic win at Armadale. Both Ryan Fisher and Matthew Wethers scored 14 for the home side. The return at Ashfield on Sunday was rained off.

NEXT MEETING: Monarchs have a tough KO Cup tie against in-form Rye House on 7th/8th May (home Friday, away Saturday).

INTERNATIONAL COMMITMENTS: Jozsef Tabaka failed to qualify from his World Under-21 round at Neustad Donau on Sunday, scoring 6 points in a meeting won by Slovakian Martin Vakulic.