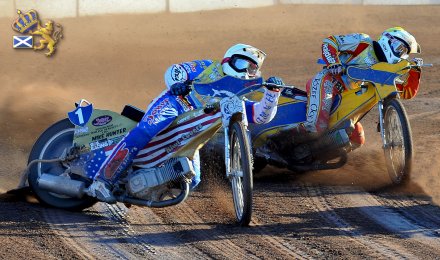 Ryan and Jozsef in the dust Image Credit: Ron MacNeill

OUT OF THE TROPHY

A weakened Scotwaste Monarchs team enjoyed little luck and were well beaten on Tyneside by 56-37, which ends our Premier Trophy involvement for this year.

Kevin Wolbert rode brilliantly twice at Newcastle last season, but his absence was certainly not covered by a feeble haul of 3 points from his four rides.

It was a long night with the meeting yawning past the two and a half hour mark, without any major incidents. It was far from a night to remember.

We had just four race winners and three race advantages and never looked like getting to grips with the two flying Danes, Larsen and Bach, both unbeaten.

Kalle Katajisto had two of our race wins but it wasn't really a night for the Kalle magic he showed us on Friday. He lost a chain, suffered a two minute exclusion and took a fall, after which a dance of frustration caused some amusement.

Andrew Tully was much improved from his freaky Friday, winning heat 4 and taking a couple of seconds. He was the only Monarch to get ahead of Bach (heat 9) but fell as the Dane surged through.

Ryan Fisher will not be happy with his night even though he boosted his score with a 6-point win while riding Matthew's bike in heat 11.

It was a poor night for Matthew who had a two minute exclusion and took 6 rides to amass 7.

Cal McDade showed spirit at no. 7 and was rewarded with a second place in heat 8. Jozsef Tabaka displayed frustratingly poor gating, twenty yards behind every time from the traps, and gave himself little chance even though he got round OK thereafter.

Our final Premier Trophy match is at Glasgow but there is now nothing in this for either side. We can concentrate on the league!