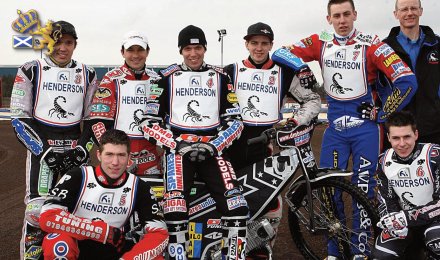 SCUNTHORPE HOME AND AWAY THIS WEEKEND

The Scotwaste Monarchs got back on the rails with a resounding home win last week, and now look forward to racing Scunthorpe Scorpions at Armadale on Friday and in Lincolnshire on Monday.

Scunthorpe means Magnus Karlsson and David Howe, a strong spearhead and two riders who know Armadale as well as anyone ? Swede Karlsson was a member of Monarchs' 2003 league championship side and Howe was the 2005 Scottish Open Champion.

KALLE RIDES!: Kalle is the man of the moment at Armadale following his sensational display last week in scoring 19+1 and equalling the track record.

It had been thought that in order to ride for Finland Under-21s in the World Cup in the Czech Republic on Saturday, Kalle would have to miss this Friday's match.

However he knows his importance to the team and has agreed to ride on Friday before making an overnight trip with a Monarchs' volunteer driver for an early morning flight to Manchester.

They won on their last visit to the track in last season's Premier Trophy semi-final, and should be at full strength.

12 MATCH MARK: Revised averages are starting to take effect around the country as teams reach their 12th match in the Premier League and Premier Trophy events which count.

As assessed average riders, Kevin Wolbert and Jozsef Tabaka will move on to new averages one week after their 12th match which is on Friday, while Kalle Katajisto and Max Dilger will not have new averages until at least 1st July, based on matches up to 23rd June (if they reach 12 matches).

AMBITIOUS SCORPIONS: Scunthorpe have built their own track and stadium in recent years, and they are now dedicated to building a successful team.

They have made it clear that they have not been satisfied with modest league placings in recent seasons and want to move upwards.

This year they finished a good second in their Premier Trophy section, with a draw at Sheffield and a win at Redcar, and in the Premier League they have been piling up big wins at home even against the likes of Birmingham and King's Lynn.

Magnus Karlsson of course was a member of Monarchs' league winning team in 2003 and has excelled on return visits since, while David Howe was 2005 Scottish Open Champion, and has also been UK number 2 and a wild card at the Cardiff GP.

LAST MEETING: Scotwaste Monarchs defeated Newcastle by a resounding 61-31 at Armadale last Friday. Newcastle didn't cover too well for their missing Danes, but for Monarchs it was a return to form. Reserve Kalle Katajisto scored a memorable and spectacular 19 points, while Kevin Wolbert was unbeaten in six rides.

NEXT MEETING: The fixture for Friday 4th June will be advised later in the week.