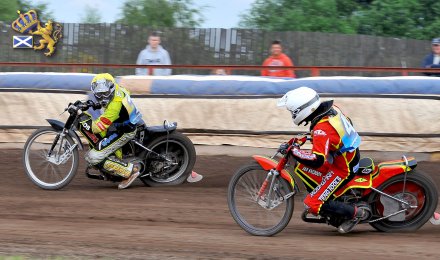 THREE AWAY WINS OUT OF THREE!

With another stirring display at Scunthorpe we shot ourselves up to second place in the Premier League, just a single point behind Rye House.

Remarkable really when you think that Scunny's last three home scores have been 55-37 against King's Lynn, 49-41 against Newcastle and 55-39 against Birmingham!

Once again the man you can't keep down, the amazing Kalle Katajisto, was well to the fore with a superb 15, making his total for the last three matches an astounding 51+3. It's quite something when a team's top five are providing the supporting cast to the number seven!

There were no problems at the top end of the team either with competitive showings from all of them. Ryan Fisher will be kicking himself for falling in the last heat when he should have taken his third win and a dozen points. Kevin Wolbert won two heats in his 9, and Matthew Wethers had a particularly fine win over David Howe in his 7.

Andrew Tully seemed to get a bad refereeing decision in heat 6 when yet again Magnus Karlsson couldn't handle one of his inside dives and came off. The exclusion helps to explain his lowish score of 4+1.

Jozsef Tabaka played his part too with a remarkable heat 8 ride, passing both Wilkinson and Lambert to join Katajisto for a 5-1 which put us four ahead on the road to victory.